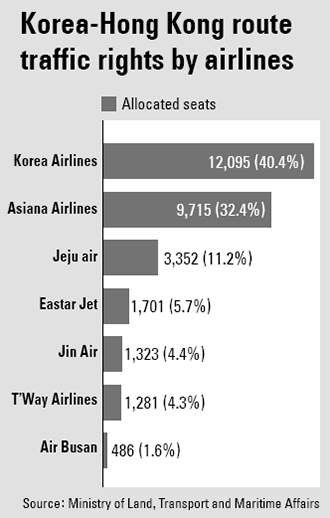 Flying to Hong Kong will likely get a lot cheaper as four local low-cost carriers (LCCs) have new or expanded traffic rights after the approval of the Ministry of Land, Transport and Maritime Affairs.


According to the ministry on Thursday, Eastar Jet and T’Way Airlines were authorized to fly to Hong Kong, while Jeju Air and Jin Air have been granted more seats.

The ministry said the open-skies accord with Hong Kong takes effect in October, but assigned the traffic rights in advance as part of its step-by-step plan.

With the new allocation of traffic rights, the local LCCs’ passenger carrying capacity on the Incheon-Hong Kong route is 27.2 percent, up from 10.5 percent.

In contrast, the share of two flag carriers - Korean Air Lines and Asiana Airlines - has fallen from 83.3 percent to 72.8 percent.

Industry insiders foresee that the new allocation of traffic rights will increase competition and offer more choices for consumers.

Although 2012 figure hasn’t been announced, the number of Koreans visiting Hong Kong is estimated by the Korea Tour Organization to reach 1.1 million, while more than 300,000 Hong Kong tourists coming to Korea. 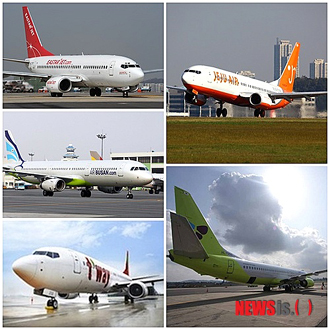 “Local LCCs usually target cities that are within a four-hour flight,” said an official from Jeju Air.

“Agreement on open-skies accords and expanding traffic rights is a big driving factor for the growth of LCCs.”

The number of passengers who use budget carriers is rising steadily, 13.06 million last year, up 24.1 percent from 10.52 million in 2011, according to data from the transport ministry.

In particular, the number of LCC passengers on the international routes last year was 3.59 million, up 95.6 percent year-on-year, as the number of routes served rose to 27 from 25 in 2011.

And the no-frill trend is expected to continue this year, with the four LCCs scheduled to put at least two more aircraft into service and launch several new routes to China and Southeast Asia.

T’Way Airlines on Thursday said it will sell a one-way ticket from Incheon to Fukuoka for 990 won ($0.92) on a first-come, first-served basis.

Including taxes and fuel surcharge, round-trip tickets to Fukuoka are 96,430 won, the company said.