Man left his daughter in the North, is still waiting

Man left his daughter in the North, is still waiting 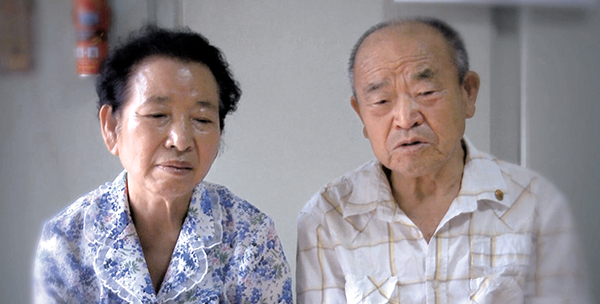 Park Bong-tae, right, and his wife speak about the daughter he left in North Korea while appearing on the Unification Broadcast under the Ministry of Unification on Feb. 6. [JoongAng Ilbo]


“My dearest daughter Hong-ok, let us live long lives so we can see each other once again in our lifetime.”

The 89-year-old Park Bong-tae, who originally came from Huichon, North Pyeongan Province in North Korea, painfully wiped away his tears while reading a letter to his daughter who he left in the North.

“It would be fortunate if I could meet my daughter in my lifetime, but I decided to send this video letter since, even after I die, as a foolish father, at least I have said what I wanted to say to my one and only daughter in the North,” said Park, while appearing on the Internet Unification Broadcasting (unitv.unikorea.go.kr) Web site on Wednesday.

Park, who worked as a train operator in North Korea, went to the South alone leaving his wife and 8-month-old daughter in the North in December 1950, when the 1950-53 Korean War was in full swing. He thought he would be able to return, but there was no way back. Park’s daughter was named after the scarlet, shining apple variety Hong-ok.

Lim Geum-boon, Park’s 81-year-old wife, whom he remarried after settling down in South Korea, said she and her husband have three sons in the South and that she also hopes the daughter will be able to come to the South. Park has been jumping rope 1,000 times every morning for 40 years. He thought he must stay healthy through jump roping in order to live long enough to see his daughter.

In 1989, he made it into the Guinness Book of World Records for jump roping 14,628 times per hour and 37,414 times in four hours. Since then, his world record has never been broken. The Ministry of Unification set up the opportunity to deliver such video letters from families in the South to those in the North ahead of the Lunar New Year.

However, due to souring inter-Korean relations, it became difficult to send the video letter immediately.

The government and the Red Cross are hoping to facilitate family reunions and deliver video letters, as it did in the past, when the atmosphere between the two Koreas improves.