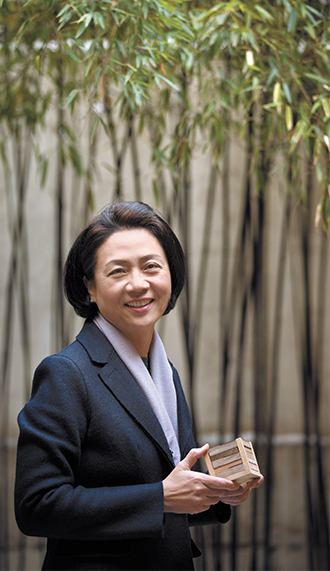 “When tradition is part of life, it has vitality. Kept only in preservation, it will decline and will only be seen in museums, like extinct animals.”

Kim Young-myoung, co-founder of Yeol, believes tradition is not an object of preservation, but recreation. Based on the belief, Yeol, the Society for Korean Cultural Heritage, has run culture projects since 2002, including activities for cultural heritage, sponsorship for traditional craftsmen and English lectures for foreigners on Korean culture and history.

The sponsorship started in 2006. At first, it selected one craftsman a year and offered a certain amount of money. However, after the sponsorship ended, there was no continuation. Therefore, it created a new project - the Buyeo Project.

According to Kim, although Buyeo, South Chungcheong, was the capital of the Baekje Kingdom (18 BC-AD 600), it has little traditional artwork. The Buyeo Project is an initiative to produce new art inspired by tradition and the history of Buyeo in about 20-30 years.

With the project, under the lead of Prof. Choi Gong-ho of the Korea National University of Cultural Heritage, local craftsmen and university students strived to create competitive work reflecting history and culture. They communicated with each other and received advice from professional designers.

“That was a whole new type of sponsorship. Students in Buyeo showed the most enthusiastic response. I hope the local economy revives through this project.”

From Jan. 29 to Feb. 15, Yeol held an exhibition marking the finale of 10 months of the project in the Yeol Hanok in Gahoe-dong, central Seoul. About 50 paintings, pieces of woodwork and ceramics were on display.

This year, Kim assumed the office of chairwoman, replacing her sister Kim Nyong-ja. Eleven years have passed since she founded the establishment with her sister to preserve and promote Korean heritage.

“It was during 2002 Korea-Japan FIFA World Cup. I met a lot of foreign guests helping my husband, who was head of the organizing committee. After finding it difficult to promote Korean culture, I looked for other ways. Then, I decided to establish Yeol.”

Yeol was named by novelist Yoon Hu-myong. “?‘Ye’ means old, beauty and courtesy and ‘ol’ means uprightness and introspection.” She said. “Yeol expresses the will to protect Korean heritage with a mother’s heart.”

Kim suggested the most significant feature of Korean culture, distinct from China or Japan, is natural beauty in harmony with the environment. Her father is Kim Dong-jo, former minister of Foreign Affairs and Trade. She spent most of her childhood in foreign nations, following her father.

“When I look outside through the small windows of the hanok [traditional Korean house] I feel consoled. Korean culture factors such as the grace of seonbi [Joseon elites] culture and comfort from simple pottery can’t be found in other cultures.”

Chairwoman Kim is also known as the wife of Chung Mong-joon, a senior member of the Saenuri Party. However, she doesn’t want anything to do with politics. She requested not to be asked any political questions before the interview.

Although she majored in politics at Wellesely College, she said it was not because she was interested in the subject. What she really wanted to do was art.

Kim thinks humans are put on the earth to create. This is the reason she enrolled in the photo academy of Chungang University. She aims to hold a photo exhibition three years later, when she becomes 60 years old. In 2009, the 30th year of her marriage, she claimed freedom from her husband and went away for three weeks. And then, she started learning photography.

“Thirty years have passed raising four children and assisting my husband. Although it might be late to create something, I want to support artists.”