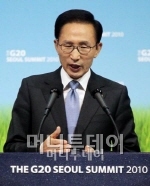 “We must not view the situation with a narrow-minded and pessimistic view,” Lee said at a meeting with specialists in diplomacy and national security yesterday. “Taking a broad perspective, we see China is changing and we can develop good relations with Beijing, and, on the basis of that, we can also realize national unification.”

On the subject of whether South Korea should also acquire nuclear arms, the president said, “It is not a realistic idea,” although he said he understands proponents of the idea.

Lee convened a consultation with the high-profile specialists, including academics and former government officials, in order to discuss solutions to a deepening security crisis following North Korea’s third underground test of an atomic device.

“Attendees reached a consensus that if North Korea continues to lavish its state budget on development of military weapons like now, it will be difficult for them to maintain the regime,” a statement released by the Blue House said yesterday.

“There was also an opinion,” it continued, “to propose a fundamental solution through regime change in North Korea and national unification, because there is a limit to resolving the matter of North Korea’s nuclear weapons through further sanctions by the United Nations Security Council.”

“Most of the attendees agreed that South Korea should deliver its own position regarding North Korea’s nuclear weapons program to Washington and Beijing,” former prime minister Lee told the JoongAng Ilbo, “when they officially start bilateral talks about the subject.”

Han, Chairman of the Korean-American Association and a former Foreign Minister, said, “Some attendees said North Korea is driving itself into an early grave. Although we recognize the extreme seriousness of its nuclear tests, it might not be that disadvantageous for us depending on how we react.”

“We reached a consensus that there is a high possibility that Beijing wouldn’t go in a way that Washington and Seoul want,” the Korea Institute for National Unification’s Ha said. “It will be difficult [to persuade] China. So we need to ponder sanctions in a way that satisfies the core values of China.”