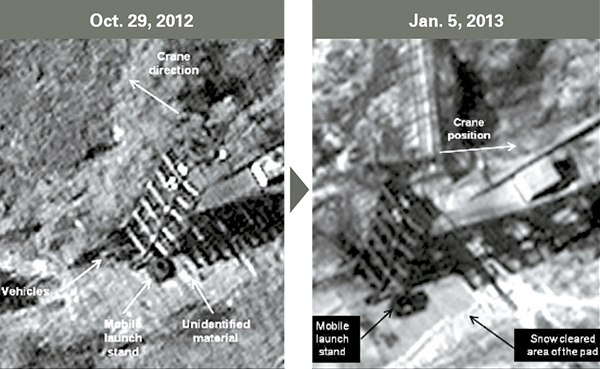 The Web site 38 North, which is dedicated to covering North Korea and is run by the U.S.-Korea Institute at the Paul H. Nitze School of Advanced International Studies of Johns Hopkins University, released Thursday two satellite images of a missile launching site in Musudan-ri, North Hamgyong Province. Based on the satellite photos, 38 North said Pyongyang is speeding up preparations for a missile launch, citing differences in the two pictures. Among the differences are the changing location of a crane and the pad around the gantry being clear of snow in the January photo. Provided by DigitalGlobe


There are signs that North Korea will test a fourth nuclear device following the test on Tuesday, intelligence officials told the JoongAng Ilbo.

“North Korea is showing activity near tunnel No. 2 and No. 3 at the nuclear test site [in Punggye-ri],” a South Korean government official said. “Particularly, there is increased activity near the No. 3 tunnel.”

According to sources and satellite imagery, there are three tunnels at the test site in Punggye-ri, North Hamgyong Province.

The South Korean military believes that Pyongyang prepared for nuclear tests in two of them: No. 2, which is to the west, and No. 3, which is to the south. The test on Tuesday was in No. 2. South Korean Defense Minister Kim Kwan-jin said Tuesday there was the possibility of an additional atomic test because the southern tunnel was prepared.

“Recently, some vehicles have been busy at the site carrying earth, apparently to fill in the underground tunnel,” the official told the JoongAng Ilbo. “Some luxury SUVs and shuttle buses have also visited the No. 3 tunnel recently.

“These movements are similar with those seen in the final stages of preparing for the third nuclear test at tunnel No. 2,” the official said.

A South Korean military official said the only thing left was a political decision by Pyongyang to go ahead with its fourth atomic test.

“The preparation work has almost been completed [in tunnel No.3],” the military official said. “So if there is a political decision, they can carry out a test soon.”

Before Tuesday’s test, Pyongyang tried to confuse the outside world by covering and uncovering the entry of the tunnel repeatedly, which has not been seen at tunnel No. 3.

“There is a possibility that the third nuclear test was aimed at consolidating the rule of Kim Jong-un among his people and promoting his leadership ahead of the Feb. 16 birthday of [his father and former leader] Kim Jong-il,” another South Korean government official said. “It could possibly carry out an additional test after seeing if the international community inflicts further sanctions on the regime.”

However, another military official said the possibility of a fourth nuclear test is low.

“North Korea entered a festive mood of celebrating the birthday of Kim Jong-il by holding a mass rally,” the official said. “It is unlikely they would do a nuclear test and have a festival at the same time.”

“While the Sohae rocket test facility was the focus of international attention in 2012, construction of new facilities at the Tonghae Satellite Launching Ground .?.?. has made important progress since late October 2012,” it said. “By January 2013, one half of the pad around the gantry had been cleared of snow and the crane was now seen pointing in a northern direction.”

Located in the northeastern tip of the country, the Tonghae Satellite Launching Station was used for rocket launches in 1998, 2006 and 2009.

Last year, Pyongyang used the newly-built Seohae Satellite Launch Station in the northwestern tip of the country to unsuccessfully test an Unha-3 rocket in April, and successfully in December.