During the Joseon Dynasty (1392-1910), whenever there was an important state event like a king’s enthronement or wedding, an organization called a dogam was set up.

It was similar to the president-elect’s transition committee that’s currently making a lot of important decisions, in that it was a temporary organization and would disband once its job was done.

On the order of the dogam, master craftsmen and artisans were gathered from across the peninsula. They were supervised by the committee as they built structures for the royal events and produced necessities such as furniture and bowls.

Everything these workers did was considered teamwork, and no one person got all the credit. Their work is thus often dubbed “anonymous art.” But the “Uigwe,” books that detail the protocols for Joseon Dynasty royal ceremonies and rites in exquisite drawings and text, contain the name of every single one of these craftsmen - even those who were commoners. The Uigwe represent a culture of documentation that is a source of pride for Koreans, and the inclusion of the names of the commoner craftsmen is notable given that Joseon was a strictly hierarchical society. 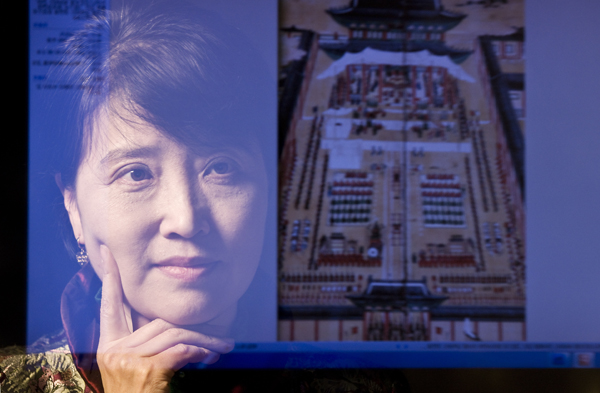 Jang Gyeong-hee poses in front of a reflection of a page from the “Uigwe,” Joseon texts that have been her long-time passion. [JoongAng Ilbo]

Jang Gyeong-hee, a professor of cultural heritage conservation in Hanseo University’s fine arts department, has been studying the names of the Uigwe craftsmen for the past 20 years. Most recently, she published a book called “Joseon’s Master Craftsmen in the Uigwe” that introduces the masters who appear in the 542 Uigwe books written between 1601 and 1928. Her book, which consists of two parts, is over 2,000 pages long, and includes 100,000 names in some 500 categories.

Jang’s first encounter with the Uigwe dates back to 1991. The death of her mentor helped introduce her to the subject that would come to be her life’s work.

That year, Lee Jong-seok, a former professor of art history at Hongik University and director of the Ho-Am Art Museum, passed away. “While I was going through the professor’s handwritten manuscripts, I came across materials on the ‘Jinchan Uigwe,’?” Jang said. In Korean, jinchan is the preparation of royal meals, and the Jinchan Uigwe is one of the volumes specifically dedicated to the relevant protocols.

Jang started going to the Kyujanggak Institute for Korean Studies whenever she could to study the Uigwe in the microfilm room. “I made copies of the microfilms whenever the names of the master craftsmen appeared,” Jang reminisced. “The microfilms were so dusty! It wasn’t an easy task,” she said.

Based on such studies, Jang wrote a dissertation called “Study on Craftwork for Auspicious Ceremonies of Royal Families of the Joseon Dynasty” in 1999 and got her second doctoral degree. She studied crafts for her bachelor’s degree and ancient art for her master’s and first doctorate, both at Hongik University.

Working with the National Research Institute of Cultural Heritage, she published studies on the artisans who made the Korean horsehair caps called tanggeon, as well those who were responsible for another horsehair hat called a gat.

The artisans of Joseon and the work they did were extremely categorized. The work for the garyeo, or royal events like enthronements or weddings, came in 430 categories. That for the hyungnye, or state funerals and other death rites, fell into 299 categories.

With that kind of legacy, Jang feels it’s rather lamentable that Korea’s current intangible cultural properties only make up 60 categories.

“Under the current system, one craftsman makes a product on his or her own, but this could bring down the quality and degree of completion. Based on the Joseon records, we need to further professionalize Korea’s craft scene.”

During the early part of Joseon and the reigns of King Yeongjo (1694-1776) and King Jeongjo (1752-1800) - considered periods of cultural renaissance - there was a system called Gyeonggongjang under which artisans worked for the government and fostered future craftsmen.

But this system was dissolved in the latter part of the 18th century, and the government started temporarily recruiting individual artisans. In this way, commoners began to get their names into the Uigwe along with those from noble families. Familiar names of the lower class - like Malttong, Gaettong and Dolsoe, which are condescendingly linked to animals or nature - appeared.

“It’s quite amazing how the Uigwe didn’t forget to mention the artisans from the lower class,” Jang said. “Thanks to that culture of documentation, even today we know exactly when and by whom the royal crafts were made.”

Although Jang has completed her list of artisan names through 20 years of painstaking work, now she has another mission: making a list of materials, tools and characteristics for each category of work.