The Vairocana Buddha of Seokguram Grotto

The Vairocana Buddha of Seokguram Grotto 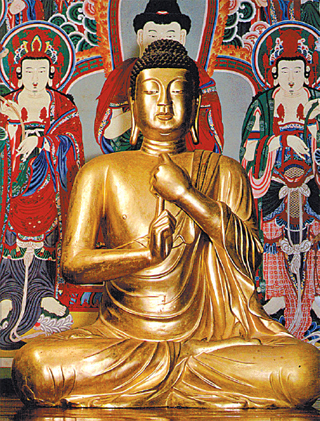 Located on the slopes of Mount Toham in Gyeongju, North Gyeongsang, Bulguk Temple was founded by Kim Dae-seong in 751, the tenth year of the reign of the Silla Dynasty’s King Gyeongdeok.

According to the historical work, “Samguk Yusa” (Memorabilia of the Three Kingdoms), Bulguk was built for the king’s parents in his present life. Seokguram Grotto was carved for his parents from his previous existence.

This 1.77-meter-tall Buddha of Enlightenment, which is said to save all people with its benign light, is enshrined in Bulguk’s Birojeon Hall.

The Buddha’s robe, expressed thinly and covering the left shoulder with the right shoulder exposed, shows the shape of a dignified body. The garment hangs down the left arm and across the body in U-shaped folds, giving a languid impression.

The index finger of the right hand is gently covered by the left hand, contrary to the posture usually used in representations of the Vairocana Buddha.

The firmly built shoulders, voluminous chest and slim waist of the statue make it an excellent example of the work of the Silla period.

But the overly wide lap and the reduced sense of vitality in the face make it clear that it is still a work from the early 9th century.


*The photos and text for National Treasure are provided by the Cultural Heritage Administration. For more information, call (042) 481-4650 or visit www.cha.go.kr