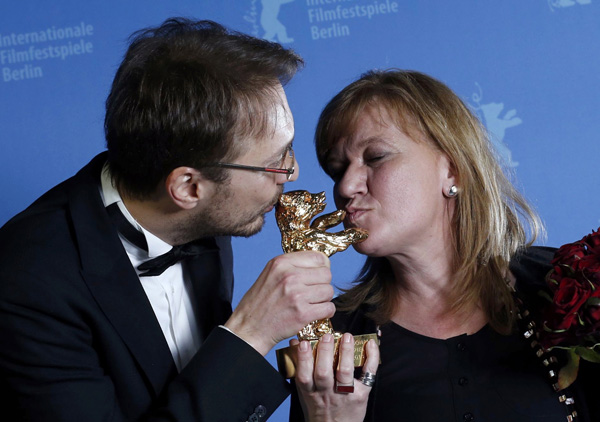 BERLIN - A Romanian drama that centers on a woman’s effort to cover up her son’s responsibility for an accident in which a boy is fatally injured won the Berlin film festival’s top Golden Bear award on Saturday.

“Child’s Pose,’’ directed by Calin Peter Netzer, emerged as the winner from a field of 19 films that included a strong eastern European contingent this year - the 63rd edition of the event, the first of the year’s major European film festivals. Netzer said he was “a little bit speechless” at the award.

The tale of corruption and guilt depicts the efforts of an upper-class mother, played by Luminita Gheorghiu, to bribe witnesses to give false statements and keep her son - the driver, who was speeding at the time of the accident - out of prison.

“This is about a .?.?. pathological relationship between mother and son,’’ he told reporters later. “The rest is really just a backdrop,’’ Netzer told reporters, stressing that it is “a very universal story’’ and that “corruption is not something which is only taking place in Romania.’’

A runner-up Silver Bear went to “An Episode In the Life of an Iron Picker,’’ in which a Bosnian Roma, or gypsy, couple re-enact their own struggle to get treatment after their baby died in the womb. The movie was made on a tiny budget by Danis Tanovic, whose “No Man’s Land’’ won the Oscar for best foreign-language film in 2002.

Nazif Mujic, the husband, was voted best actor by the festival jury.

“Of course, I’m not an actor - I simply played my own story. I played myself in my family. I don’t know what I should say,’’ Mujic, who says that he still has no regular job and collects scrap metal as he did at the time the drama played out, told 3sat television.

Best actress was Paulina Garcia for the title role in Chilean director Sebastian Lelio’s “Gloria.’’ Garcia plays a divorcee at the end of her 50s trying to stave off loneliness, rushing into singles’ parties but struggling to overcome disappointment.

American filmmaker David Gordon Green was honored as best director for “Prince Avalanche,’’ a movie about two road workers whiling their way through a long, monotonous summer with little more than each other for company. It’s a remake of an Icelandic film, “Either Way.’’

The best script award went to dissident Iranian filmmaker Jafar Panahi for “Closed Curtain,’’ a movie he co-directed with longtime friend Kamboziya Partovi in defiance of a ban on filmmaking.