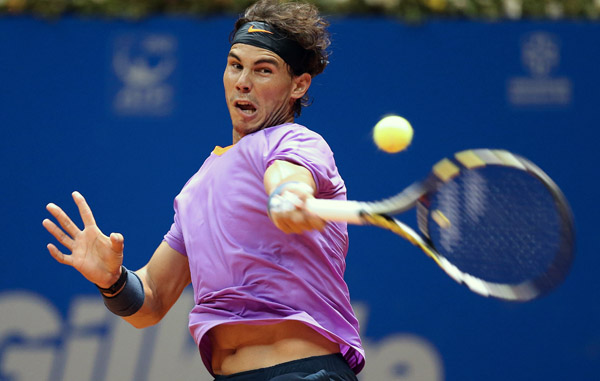 SAO PAULO - Rafael Nadal outlasted 111th-ranked Martin Alund 6-3, 6-7 (2), 6-1 at the Brazil Open on Saturday, making it to his second straight final after a long layoff to treat his ailing left knee.

Nadal next plays David Nalbandian, the former world No. 3 who defeated Simone Bolelli of Italy 6-3, 7-5 to make it to his first final since being disqualified for injuring a line judge at Queen’s Club last year.

Still looking for his rhythm and working his way into match shape, Nadal lost six straight points in the tiebreaker to go to a third set with the Argentine, who made it into the main draw as a lucky loser from qualifying after compatriot Leonardo Mayer withdrew with an injury.

Nadal then dominated the third to close out the match in 1 hour, 56 minutes.

Nadal will try for his 51st singles title on Sunday, and first since winning the French Open for the seventh time last June.

The Spaniard said he struggled with his sore knee throughout Saturday’s match at the indoor clay-court tournament.

“I didn’t feel well today, it was the worst day for my knee, and if the knee is not well it makes it very difficult to play,’’ Nadal said. “But I am happy with the result. After seven months without playing it’s good to reach the final again, even if I’m not at my best.’’

Nadal is recovering from a torn and inflamed tendon in his left knee. He returned to action in Chile last week, losing the singles and doubles finals.

Nadal, who won the Brazil Open in 2005, had already struggled in his quarterfinal on Friday, escaping with a three-set victory. He dismissed the favorite label for Sunday’s final.

“It will be very hard,’’ he said. ‘’I didn’t feel well today but I hope that I’ll be better tomorrow. I’m not the favorite but I’ll try my best. [Nalbandian] has been playing very well. Let’s see how it goes.’’

In the first semifinal, Nalbandian broke Bolelli just two games into the match and easily took the first set, then rallied from 3-1 down in the second at the Ibirapuera arena.

The 93rd-ranked Argentine converted all of his five break points.

“I started playing well, very solid,’’ said Nalbandian, who is looking for his 12th career title and first since 2010. “I lost a bit of focus and it became another difficult match, but fortunately I was able to come through with the victory.’’

Nalbandian hadn’t made it to an ATP final since his disqualification for kicking an advertisement board and injuring a line judge during the grass-court tournament in London last June. AP