LG CNS puts its hopes into the data cloud

LG CNS puts its hopes into the data cloud 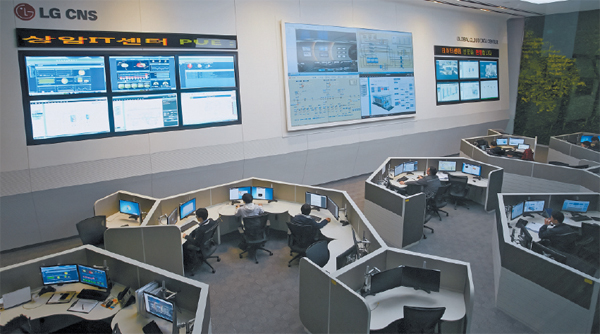 LG CNS employees work at a control room of the country’s largest data center, with a storage capacity of 72,000 servers, in the Mieum Industrial Complex in the Busan-Jinhae Free Economic Zone in January. The company plans to build three more in a bid to create the biggest data-center park in Korea and make the country a global hub for cloud computing. Provided by the company

BUSAN - Hundreds of servers holding reams of data for KakaoTalk, the country’s most popular mobile messenger service, are seated on the shelves of a server room at LG CNS’ Global Cloud Data Center in Busan.

Built in the south of the country, the region least prone to earthquakes, the data center uses LG CNS’ proprietary air-cooling technology to keep the servers cool enough to operate smoothly around the clock.

KakaoTalk decided to store its servers at a more secure location after experiencing a temporary freeze-up last year due to power supply problems. It chose LG CNS’ Busan center, which is equipped with a duplex power supply system that cuts the risk of power outages.

The 32,321 square-meter (7.9-acre) center, which opened in January, was built by LG’s IT solution development unit and is capable of accommodating 72,000 servers. It’s the largest data center in the country and spans an area the size of five football fields.

“We take in cold air from outside to cool down hot air inside the building to store our clients’ servers as safely as possible,” said Kim Hwang-ki, director of the center. This happens at both sides of the building, while in the middle a chimney-like space releases hot air outside.

LG CNS recently won a patent for this cooling technology.

“We keep the average temperature of each server room at the level demanded by each client,” said Park Il-pyo, a manager at the center. “That’s possible with our original technology.”

Most of the world’s data centers use large, power-guzzling air-conditioners to cool down their server rooms, making power consumption a constant issue.

LG CNS’ newest data center is aimed at helping address the power issue. Its goal is to reach 1.4 in terms of power usage effectiveness (PUE), an index that indicates the annual power consumption of a data center. The closer the number gets to 1, the more power efficient it is.

The average PUE for data centers around the world stands at 1.8.

Given that the Busan center receives 40,000 kilovolt-amperes of power, cutting the PUE by 0.4 means it can save about 28 million kilowatt-hours of electricity, or enough for 5,840 households for a year.

LG CNS, which has been running three data centers in the Seoul metropolitan area, chose Busan for the new center in order to make it a global data hub.

The firm’s goals are aligned with the government’s plan to make Korea a powerhouse in the cloud computing industry in five years. LG plans to build three more data centers in the coming years on a total of 133,000 square meters of land in a bid to create the country’s first data-center park, like those in Singapore and Hong Kong.

As Busan has less seismic risks than cities in Japan and Taiwan, it has a higher chance of becoming a global data center hub, according to the company.

LG’s Busan center is also the first building with seismic isolation technology in the country. It’s built about 3 meters (9.8 feet) above the ground and is supported by 96 pillars with dampers that are anchored deep in the ground. According to the company, the facility can resist an earthquake of up to 8.0 in magnitude and a 5.5-meter-high tsunami.

“The seismic isolation technology applied to our data center could be more sophisticated than that of nuclear power plants in the country,” said a company spokesman.

Other geographical advantages of Busan include easy access to the Asia-Pacific region, according to Sohn Joon-bae, a vice senior president of the company.

“The number one goal of this cloud data center is to make our overseas clients feel secure, as if they have their servers right next to them, through greater connectivity,” Sohn said.

Two Japanese companies are currently storing their servers at the center, and the company is in talks with about 20 more Japanese clients.

“There are national risks, like the latest nuclear test by North Korea, but they are manageable as we try to appeal to clients with various international events that have taken place in the country and its stable credit level.”