From the glamor of opera to shrivelled cabbage

From the glamor of opera to shrivelled cabbage 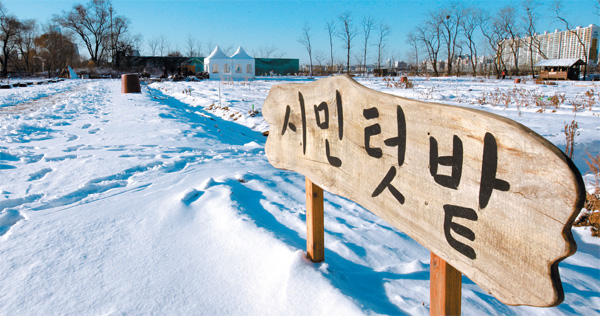 The “Nodeul Farm” on Nodeul Island in Seoul is a desultory place. Plots are assigned to families, but many have been abandoned and shriveled cabbages and radishes dot them. By Park Sang-moon

The Hangang Bridge over the Han River connects Yongsan and Bon-dong, Dongjak District. If you’re driving southbound, you will see a small sign reading “Nodeul Farm” that directs you down to an island in the Han.

The farm is a desultory place with swaying scarecrows and stray cats that shy away from an unexpected visitor. A gray container contains the management office of the farm and it lends tools to city folk who want to grow crops in the farm’s plots for their dinner tables. Plots have signs with families’ names, but many have been abandoned and shriveled cabbages and radishes dot them. The Nodeul Farm is a trackless wilderness in the middle of a gleaming capital city.

On the other side of the island, the city government has created a sledding ground of 600 square meters (6,400 square feet). A vinyl greenhouse holds 50 sseolmae, traditional Korean sleds, and a stove to get warm around. The stove was stone cold on a recent visit and the sledding ground was empty. No one showed up to sled until 4:30 p.m.

“Since it opened on Dec. 24, only one family showed up, and that was on opening day,” a staffer at the farm said when the Korea JoongAng Daily visited the place in late December. “Not many people know about it but we’re trying to advertise more so more people can come and play.”

A single family enjoys sledding on sseolmae (traditional Korean sleds) on a recent wintery afternoon on a sledding ground created next to the “Nodeul Farm” on Nodeul Island in the Han River. By Park Sang-moon

But Oh resigned after losing a risky referendum on the issue of whether the city should pay for free school lunches for schoolkids. His successor, civil-rights-lawyer-turned-politician Park Won-soon, is very much a liberal in favor of more welfare spending and less spending on the prestige projects beloved by Oh. Since being elected in October 2011, Park has been cancelling or trimming Oh’s large projects like the West Sea Waterway, which aimed to link the Han River with the Yellow Sea and ports in China to operate luxury cruise ships to attract more international tourists, and the Floating Islands, exhibition spaces that float on the Han River in Banpo-dong, southern Seoul.

A year ago, Park cancelled the Han River Art Island project, and the city came up with the idea of using it as a free farm for Seoul residents from autumn to fall and a sledding site when winter comes around.

But the fact is the city government already spent 55.1 billion won to purchase land and designing facilities for the Han River Art Island, and some people are saying that investment should be put to better use.

“They made the most expensive family farm in the world,” says Kim Yong-seok, a member of the Seoul Metropolitan Council from the Saenuri Party, which is in the minority in the council. “It is fine to find another solution if a project doesn’t guarantee a profit for its investment. But I seriously doubt the farm is a better idea for the average citizen than Oh’s opera house.”

About 7,050 square meters of Nodeul Island’s 22,554 square meters are being used for the farm. Reeds take up the rest of the island. The city government says an average of 117 people visit the farm a day during the warmer weather.

“I’m not even sure I’m at the right place,” says Park Chang-mo, a 42-year-old resident of Seodaemun District who has driven his wife and daughter to the island for sledding. “I expected to see more people playing. This is kind of embarrassing.”

Four staffers on the island say they work for a civic group called “Heuksalim,” a soil research institute. They insist that their duties are limited and that the city doesn’t pay them a penny.

“We are only here to help people who don’t know much about farming,” Kwon Sa-hong, secretary general of the institute, said. “We do lend farming tools and give advice on farming, but we are not responsible for managing the island. We are all voluntary workers and it is the city government’s job to manage this place.”

A staffer told the Korea JoongAng Daily that only about 20 people visit the farm three to four days a week during the growing season, and more than half the registered users don’t visit the place even once a week.

“The problem with these canceled or scaled-down city projects is that billions of won in taxpayers’ money is wasted and no one in the city government is taking responsibility,” says Jeon Sang-bong, head of the Seoul Grassroots Civil and Social Group Network, a federation of civic groups that monitor the city government. “Officials who led those projects including the Han River Renaissance still work for Mayor Park as high-ranking officials.”

“We feel sorry for the cancellations or scaling-down of many projects championed by former Mayor Oh,” a spokesman for the city government said. “But there are things that we can’t handle when there is a political change in the city government. We now are focusing on minimizing wasting taxpayers’ money and trying to get the best outcomes for those projects. The farm is a two- to three-year program for Nodeul Island and we are trying to figure out how best to utilize the place.”

“People shouldn’t expect profits from those large projects like the Han River Renaissance,” says Professor Kim Sei-yong of the Department of Architecture at Korea University, “because one of their main purposes was improving the city’s living environment. Once you create landmarks in a city, they generate economic effects over a long period and both expected and unexpected industrial activities occur. They emphasize why those projects should be stopped or revised, but the more important thing is to make productive changes.”