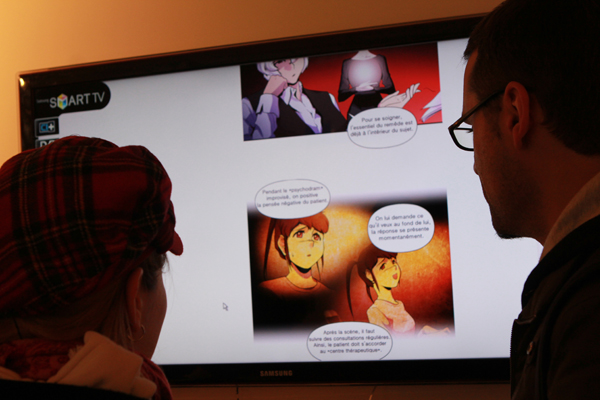 
ANGOULEME, France - “Aargh!” A shriek emits from a group of girls in one corner of the exhibition and quickly turns into giggles. They were frightened by a bloody hand that suddenly sprang up in a scene from a comic on a 40-inch monitor.

The comic was “Oksu Station Ghost” by the Korean artist Horang, who specializes in online comics known as Web toons.

The artist made the scenes come alive by using Flash animation. The movement helps to maximize the tension in horror comics.

The scene was playing out at the 40th Angouleme International Comics Festival in Angouleme, a small city in the southwest of France, from Jan. 31 to Feb. 3. This year, Korea was invited as guest of honor for a “Special Coree,” a special exhibition of Korean comics in the 375-square-meter (4,036-square-foot) Place Saint-Martial in central Angouleme.

In the section “Play with Digital,” major works from famous Korean Web toons were displayed on screens and tablet computers.

Because of their online, scroll-down nature, Web toon artists can use a range of different tools in their works. A ghost in “Bongcheon-dong Ghost” suddenly turns her head and rushes toward another character. It looks like she jumps out of the screen.

Action thriller Web toon “Gisado” uses sound effects on top of the background music. When you scroll down to a scene where a character rings a doorbell, you can hear the chime.

In “The Story of Constanze: The Strange Survival,” a dramatic work about a victim of sexual violence, readers can watch an animated film clip as the characters watch the same clip in the scene.

Students visiting as a group were thrilled by the exhibit. Ahn Marie, the 40-year-old teacher in charge, said, “It was enlightening to be able to read by scrolling down. I think the reason students like them is because they’re as lively as movies.”

Angouleme International Comics Festival is the biggest such event in Europe, with over 200,000 visitors every year. This isn’t the first time Koreans have participated; the country was also the special guest in 2003. At the time, print comics accounted for the majority of the exhibits.

Over the past decade, conditions surrounding the Korean comic market have changed significantly. The wane of the publishing industry and the rapid development of digital technology have shifted where comics are produced and consumed from paper to the Internet.

According to Korea’s major Web portals Naver and Daum, over 200 comics are posted every week and about 17 million users read them a month.

As the platform shifted, the modes of expression also changed. Art suitable for vertical scrolling reading and ingenious IT technology additions have led a sea change in comics.

Philippe Lavaud, mayor of Angouleme and honorary director of the festival, said, “We invited Korea again to publicize the artistic achievement, technical development and new modes of expressions that Korean comics have achieved in the past ten years.”

Interest in digital cartoons is growing in France, which has one of the most biggest markets for comics. Delitoon, the first French-language Web toon portal, opened last May.

Didier Borg, administrator of Delitoon and editor at Casterman, France’s biggest comic publishing company, said, “There are young artists posting their works on blogs in Europe too. Among them, outstanding artists started serializing their works on Delitoon. This modeled the Korean Web toon system.”

From March, works of Korean Web toon artists will be introduced on the Web site.

A total of 60 Web toons were presented at the exhibition, including Cho Suk’s comedy work, “The Sound of The Heart,” and Yoon Tae-ho’s drama comic, “Misaeng.”

Europe is the biggest market for Korean comics, beating out both the United States and Japan. According to the Korea Creative Contents Agency, Korean comic exports to Europe surged to $2.25 million in 2010 from $410,000 in 2005.