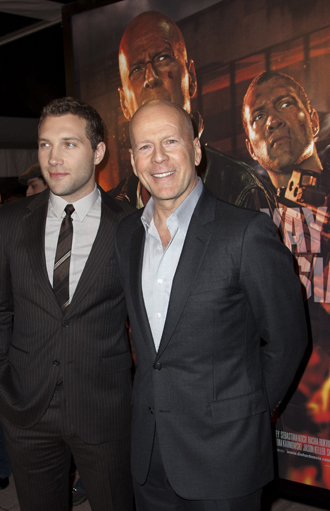 The fifth movie in the Bruce Willis’ “Die Hard” franchise scored the biggest box-office action over the U.S. holiday weekend, beating out love story “Safe Haven,” which came in third for the Friday-through-Sunday period.

“A Good Day to Die Hard,” with Willis returning as the tenacious, wisecracking hero John McClane, pulled in $25 million at U.S. and Canadian theaters over the three days, according to studio estimates.

The tally was expected to approach a total of $40 million for the five days that began with Thursday’s Valentine’s Day and ends with Monday’s Presidents Day holiday in the United States.

“Die Hard” beat “Safe Haven,” an adaptation of a Nicholas Sparks novel that was aimed at luring couples during the week of Valentine’s Day. The film, which stars Julianne Hough and Josh Duhamel, pulled in $21.4 million over the three days.

Willis prevailed with his reprisal of a role he played four previous times starting with the original “Die Hard” in 1988. Those movies grossed $1.1 billion around the world and made Willis a global action star.

In the new movie, McClane travels to Russia to help his estranged son, a CIA operative played by Jai Courtney, in a fight to prevent a nuclear weapons heist.

Chris Aronson, president of domestic distribution at 20th Century Fox studio, said the film performed “right on par with our expectations,” which was near $40 million for the five-day period.

Audiences were about 55 percent male and 45 percent female, with just over one-third under the age of 25 and two-thirds 25 and older, which Aronson said was in line with the franchise’s last installment.

The opening was nearly double the total of the original “Die Hard,” adjusted for inflation but down significantly from the previous three films in the franchise, according to figures from boxofficemojo.com.