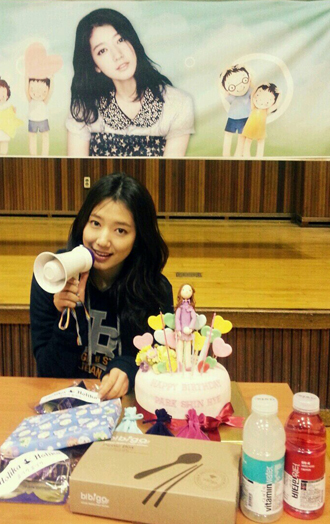 Actress Park Shin-hye thought outside the box, to celebrate her 23rd birthday yesterday.

A day before turning over a new leaf, Park celebrated by holding a unique fan meet at eastern Seoul’s Jungnang District community center. Park kicked off the event with an opening speech and the pledge of allegiance to the national flag, like a real sporting event. Then the festivities got under way, and Park indulged in some one-legged wrestling and relays. The fan meet lasted about three hours and ended with cake. “She always said that she wanted to meet her fans at close range,” said the agency on the unusual fan meet. Park also took to Twitter afterward to thank all her fans for coming. “To all who were there, I had just a great time thanks to you,” tweeted the birthday girl. Park has another reason to be in good spirits of late. Her latest film “A Gift From Room 7” has exceeded the 10 million mark in ticket sales recently.

The film centers on an intellectually challenged man, Yong-gu (Ryu Seung-ryong), who is wrongly convicted of murdering a child while purchasing a gift for his beloved daughter Ye-seung (Gal So-won).