Han Biya wants to teach others how to give

Han Biya wants to teach others how to give 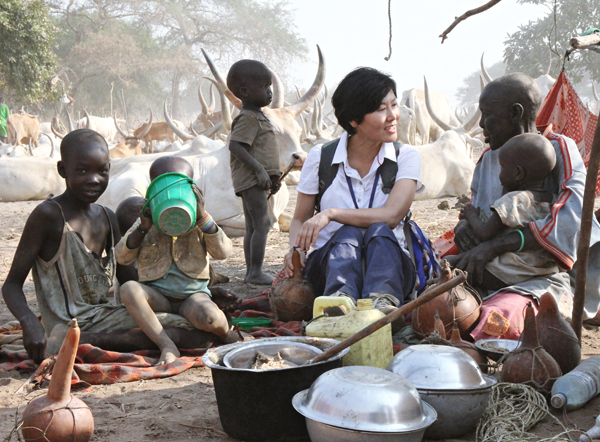 
Han Biya, 55, wears many hats: She is a best-selling travel author with eight books under her belt, an emergency response manager for World Vision Sudan, visiting professor of Ewha Womans University lecturing in disaster management training, and an advisor to the UN Central Emergency Response Fund, in which she oversees aid money allocation.

Most of all, Han is an icon for adventure, especially among young Koreans.

Her adventures began when she quit her lucrative job at Burson-Marsteller Korea and hit the road with all the money she earned. Between 1993 and 1999, she traveled to nearly 70 countries.

The accounts of her seven-year-long trip to exotic countries such as Afghanistan brought her instant fame.

Then there was one more dramatic turn in Han’s life.

Twelve years ago, she laid down her backpack and headed to unstable areas such as Iran, Afghanistan and Sudan to serve as a relief worker.

More recently, one more title was added to the resume of this petite woman: A principal of the School of Global Citizenship.

Run by World Vision Korea, the three-night camp is where teenagers learn the requirements to be global citizen. Upon arrival, a different nationality is given to each student regardless of their preferences. Depending on their nationality, different amounts of rice, side dishes, water and other necessities are given out.

For example, if you are lucky to be French you have plenty of things, but you have almost nothing if you become a citizen of Sudan. In this way, camp participants learn how to share their limited resources on their own.

The School of Global Citizenship was an extracurricular camp favored by a limited number of parents and children. However, the Ministry of Education, Science and Technology thought the program should be available to more people. Three months ago, the Education Ministry and World Vision Korea signed a memorandum of understanding.

Under the MOU, the education ministry will assist the youth camp in developing education materials for all walks of life, from preschoolers to adults, and nurture instructors who teach diverse groups in the field.

“International relief groups used to take some heat from people who would say we already have plenty of Koreans who are in need of help within the country,” says Han, who returned from South Sudan and gave a special week-long lecture at Ewha Womans University late last month.

“But now the ministry of education wants this global citizenship education to be accessible to many more people. Indeed, we’ve come a long way from the old thinking when a majority of Koreans underestimated international relief.”

A primary excuse for this interview was Han’s new title, but as a member of a generation who grew up reading Han’s adventurous and juicy stories from her trips, this reporter wanted to know about more than her new job. 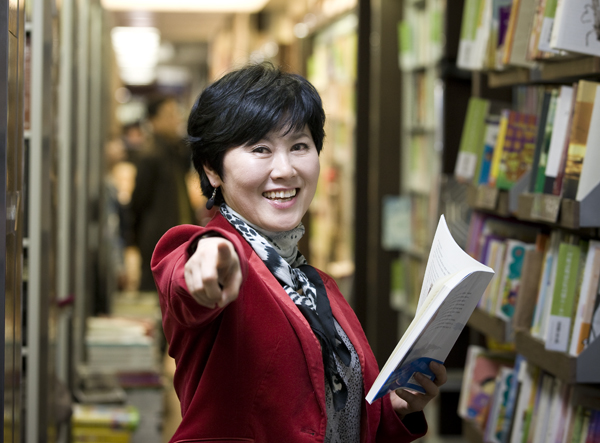 
The Korea JoongAng Daily sat down with Han at her office in Ewha Womans University.

Q. You are involved in many different projects. How is it possible to juggle all of them?

A. My many titles might lead people to believe I’m doing this and that (without focusing on just one area) but all these projects are based on the same thing. I’m doing all these things just because I want to be a better relief worker. For example, people (working for the public sector) want to hear from me because I’m working in South Sudan so that they can consider my voice and experience when they come up with policies. I also teach based on my experiences for those who are interested in becoming a relief worker. I think sharing my experience is one important job for me as a relief worker.


You and World Vision Korea have been trying hard to promote the notion of global citizenship and the School of Global Citizenship is a product of such efforts. Recently, the youth camp signed an MOU with the Education Ministry. What does it mean to you?

I used to mention two hands when I raised funds. We have two hands, one is for ourselves and the other is for others. But now I tell them we are born as a global citizen. Think about it. Hundreds of thousands of Koreans go overseas every year. We must know, as a member of a global house, not a global village, which room has a leaky roof and which room is colder than the others. This is the basics of the camp. With this education, I want to put our children on fences so that they can look inside and outside the country.

What do you want to achieve through the School of Global Citizenship?

We received donations from Western countries and now we have to give things back. There are many ways of helping others but what we want to teach is how to help others in good and polite ways through the school. When you give somebody a loaf of bread, you can throw it. As long as the person is hungry, he would pick it up and eat but he wouldn’t appreciate it. It’s not a good way of giving but some countries still donate in such ways.

Tell us the very beginning of the School of Global Citizenship. Was there any critical moment for you to donate 100 million won ($91,911) to found the school?

Years ago, I had just returned from a place that was devastated by earthquakes. I had to raise funds so I did a live morning talk show in Korea. When the talk show was nearing its end, I talked about victims of the earthquakes and we raised a total of 600 million won.

I was happy but also bitter. I felt like I stimulated people and make them donate on a whim, as if they were shopping and purchasing things that were unnecessary to them. I thought to myself ‘what if people decide to help others after they are educated and not just caught up in sad stories?’ There were people around me who wanted to work on this type of education. That was the beginning.

You are often chosen as a role model of young Koreans. Your books also inspire many of them. Among others, “March to the World, Off the Map” (2005) is considered the bible for those who want to work in the world’s relief organizations. Do you feel responsible for these young people who look after you as a role model?

Looking at these young people, I feel great responsibility and a kind of brotherhood. They decide to live for others, not just for themselves. I always think about things that I can do for them and my conclusion is I have to live well. I can’t fall ill. If I get sick, I might set the wrong example and discourage people who’d like to work as a relief worker. It might lead them to think the job is very dangerous.

When I was in Juba, South Sudan, there was a cathedral within a 10-minute walk. I went there every day and prayed for people who followed in my footsteps.

You love your job but you are a human, after all. What is it like to work and live in dangerous areas?

It is, of course, tough. When I feel helpless, a sudden fear of malaria grips me. In addition, there is no electricity but it is 40 degrees Celsius (104 Fahrenheit) outside. Without an electric fan, I wake up and find my T-shirt is soaked with sweat. It’s exhausting to not sleep well at night. But I wake up early in the morning just because I love my job. There are also moments when I’m frustrated. We’re there to give a helping hand, but indifferent local governments and local people sometimes make me cry. Thinking that I have a few more years before I turn 60, I still try to appreciate every moment that is given to me. There are people who work at the scene even after 60 but I will probably make way for my juniors when I turn 60.

The very first journey of yours began with travel. People who travel on a regular basis often get itchy feet after a trip. Do you sometimes miss the days when you roamed the world?

There are three things I love the most: travel, writing and hiking. I gave up on travel for my work. That’s what I sacrifice as I work as a relief worker. Instead, I try to go hiking as much as possible. The first thing I did upon my arrival this time was go hiking. But I always plan trips. I’d like to go to South and North Africa someday by boat.

Did you have a hunch that your books would become instant best-sellers when you published your first book in 1996?

I didn’t even know how to become a writer. I just loved writing.

Some say you are an overrated celebrity of the late 90s. What do you think?

Can you tell us your immediate goals in your life?

I want to see more high-quality relief workers coming from Korea. I also want to pave the road for my juniors so that they can start in better circumstances.

- Master’s degree in communication from University of Utah, United States