After posting strong profits in 2012 thanks in part to a favorable exchange rate, Korea’s top two flag carriers are struggling against the weakening yen and both plan to cut costs and look for ways to increase demand.

However, the two airlines have seen operating profits hurt by rising fuel prices and a decline in cargo business amid the global economic downturn.

KAL announced that its 2012 sales rose 3.7 percent year-on-year to 12.7 trillion won, but operating profit plunged 30 percent to 322.4 billion won. Cargo shipments by KAL were down 5 percent.

Asiana said it posted 5.88 trillion won in 2012 sales, a 5 percent increase from the previous year, but operating profit was cut nearly in half to a 179.4 billion won. The affiliate of Kumho Asiana Group said operating costs increased 10.4 percent year-on-year in 2012, citing a 6 percent rise in the price of oil from the previous.

In 2013, the cause for concern is a revenue decline from lucrative Japanese routes, which account for 15-20 percent of earnings, due to the weak yen. 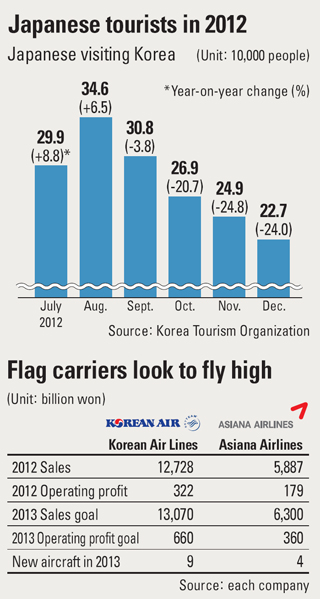 According to the Korea Tourism Organization, the number of Japanese tourists has declined since 308,882 visited Korea in September. By December, the number of tourists was 227,227, a 24 percent year-on-year decrease.

“Along with the Dokdo dispute in September, the weakening yen is making Korea less attractive for Japanese tourists,” said Shim Won-seob, an analyst at IBK Investment & Securities. “Japan routes are one of the profitable resources to airlines, but the weakened Japanese demand is expected to be a negative influence at least through the second quarter of this year.”

While acknowledging that exchange rates are out of their control, KAL and Asiana say they will do what they can.

“The weak yen is certainly not good for us, but at the same time a strong won can give us some advantages as it reduces our debt payable in dollars and can encourage more Koreans to travel overseas,” said a KAL spokesman. “What’s important is that we should have a healthy business platform that can sustain us in any situation.”

For this year, KAL said it is aiming for a 7 percent increase in revenue to 13.07 trillion won and an operating profit of 660 billion won, 50 percent higher than last year.

The affiliate of Hanjin Group was busy expanding its business last year, opening eight international routes and adding 14 new aircraft, eight of them smaller planes like the B737.

KAL reportedly plans to invest 1.91 trillion won in 2013, which is 16 percent more than last year. The airline expects to add nine new aircraft this year, most of them large planes like the A380, B777 and A330.

Asiana, which celebrated its 25th anniversary on Sunday, is targeting sales of 6.3 trillion won and operating profit of 360 billion won this year. It will add at least four new aircraft, compared to 12 in 2012.

“The number of new aircraft will be small this year, but we will upgrade other facilities and systems,” said a spokesman from Asiana. “It will be important to utilize the aircraft and maximize the profit from flights.”

As carriers enter the summer flight schedule starting March 31, they will adjust their routes to reduce unprofitable flights and add flights on popular routes. However, KAL and Asiana are focusing on different regions.

KAL plans to increase flights to Dallas, Toronto and Las Vegas, aiming for 115 flights a week to North America.

Although the number of Japanese tourists is declining, KAL will increase flights to Narita International Airport from 28 times per week to 35 when an open skies accord takes effect next month.

However, the carrier will suspend its flights to Hakodate and Nagasaki in Japan, Melbourne in Australia and London’s Gatwick Airport. In addition, the number of flights to Jakarta and Ho Chi Minh City will be reduced.

“We will try to focus on long-distance routes that low-cost carriers can’t fly,” an official from KAL said. “We will maximize our profit by putting on more flights to America during the summer vacation period.”

While KAL decided to focus on the West, Asiana is looking to boost flights to China. It will fly to Chengdu once daily, while expanding Dalian flights to 10 per week. Its Incheon-Huangshan flight will resume next month.

In addition, Asiana will fly to Singapore 10 times a week, while adding two more flights weekly to Tashkent, Uzbekistan.

But it will halt flights from Busan to Ho Chi Minh City and Hanoi for six months, and cut flights to Okinawa to seven a week from nine.

For the sluggish cargo business, the two airlines hope that the global economy recovers soon but will keep tapping emerging markets in South and Central America and the Middle East. They also plan to utilize cargo space on passenger flights.

Although the airline industry seems to be recovering, industry observers said that local flag carriers also will have to pay attention to the rise of low-cost carriers.

“Last year, local airlines were aggressive in expanding, but this year they are little retrenched as they try to shore up internal stability,” an industry official said. “As low-cost carriers rise, along with various external factors like currency rates and oil prices, KAL and Asiana will have another busy year if they hope to have a profitable 2013.”