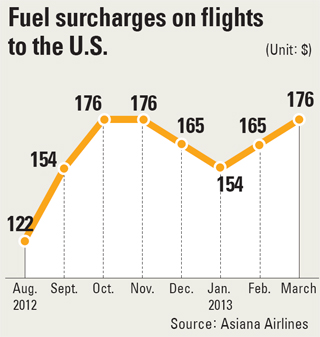 Flying out of the country next month will cost more as Korean airlines raise their fuel surcharges for international flights to reflect more expensive jet fuel.

Flag carriers Korean Air Lines and Asiana Airlines said yesterday the fuel surcharge for international flights departing will be raised to level 17 from 16.

The fuel surcharge rate structure consists of 33 levels and is based on the trend of the average price of Mean of Platts Singapore (MOPS), a measure of fuel oil cost.

With the level 17 rate, a one-way ticket to the United States will carry a fuel surcharge of $176 starting in March, up $11, while the surcharge for Europe and Africa flights will go up $10 to $168. 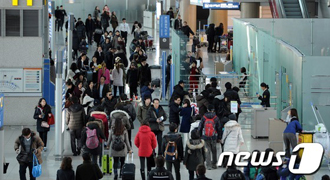 Fuel costs account for 30 percent to 40 percent of an airline’s total costs.

Fuel surcharges applied only to cargo flights until they were added to passenger flight costs in April 2005.