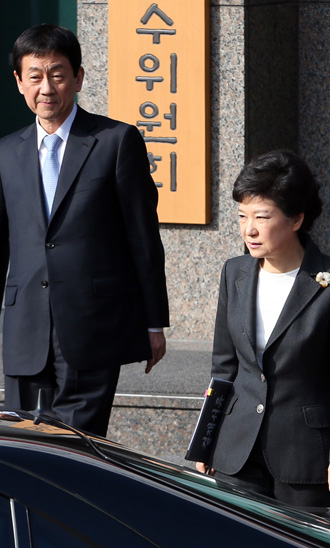 President-elect Park Geun-hye yesterday named Huh Tae-yeol, a former three-term lawmaker of the ruling party and her longtime associate, as chief of staff of her presidential office.

She also appointed three senior secretaries for the Blue House in her first round of appointments for the presidential secretariat.

Yoo Min-bong, the head of the transition team’s state planning and coordination subcommittee, was appointed as Park’s senior secretary for state planning.

Park will fill the six remaining vacancies in the senior secretariat in two to three days, Yoon said.

Huh, 67, is a native of Goseong County, South Gyeongsang. The Sungkyunkwan University graduate passed the civil servants’ exam in 1970 and started his career with the Seoul city government. After serving key posts in the interior ministry, Huh served as the North Chungcheong governor from 1994 to 1995.

In 2000, he scored his first legislative election victory in Busan on the ticket for the Grand National Party, the predecessor of the Saenuri Party.

He was re-elected in the constituency in 2004 and 2008. In the April 2012 legislative elections, he failed to win the party’s nomination after the party decided to make a strategic nomination for his constituency.

“I will do my best to assist Park so that she can successfully realize her philosophy in state affairs,” Huh said yesterday after the appointment.

Kwak, a 53-year-old lawyer and former veteran prosecutor, is a native of Daegu. He studied law at Sungkyunkwan University and passed the bar exam in 1983.

After completing his military duty as a military prosecutor, he began his career as a state prosecutor in 1989 at the Seoul District Prosecutors’ Office.

The senior secretary appointee for public relations, Lee, is a native of Yeongam, South Jeolla. The 63-year-old former producer began his career with the Tongyang Broadcasting Company in 1974.

Park’s appointment of the four Blue House aides came one day after she nominated 11 minister candidates to complete the cabinet formation.

While the nominees for the cabinet are required to go through the National Assembly’s confirmation hearings, Park can appoint her presidential secretaries without the legislature’s approval.

“It showed Park’s determination to create a secretariat only loyal to her by appointing close associates and transition team members,” said Representative Lee Un-ju, spokeswoman of the DUP. “This is the worst choice after a long deliberation.”

Lee also criticized Huh, the presidential chief of staff appointee, for some controversial remarks and actions that he made in the past.

“He is a man who does not understand what Liberation Day means to the Korean people.”

Lee also said Huh had called the DUP “a puppet of the commies” in 2009 and claimed in 2010 at a National Assembly seminar that “Korea must create a free sex, free casino special zone to lure 1.5 billion people from China and Japan.”

The DUP spokeswoman also said Huh’s younger brother was accused of receiving 500 million won ($461,894) in March 2012 in return for influencing a nomination for the legislative elections and later convicted of the charge and ordered to serve two years and six months in prison.