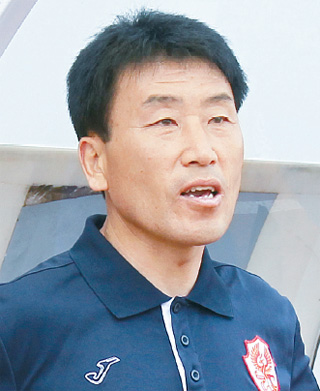 Gwangju FC was disgraced last year when it became one of the country’s first professional football clubs to be relegated to the lower league, but its new coach says that the team is all set to fight its way back to the first division.

Gwangju, who finished 15th in the 16-team K-League Classic last season, was relegated along with the bottom-place Sangju Sangmu Phoenix to the newly created second division, the K-League. That means they’ll compete alongside six other teams for the right to get back into the first division.

Yeo Bum-kyu, who became Gwangju’s head coach after serving as assistant coach for the franchise for two years, sat down with Ilgan Sports during the team’s training session in China. He said the players, once depressed about the relegation, are now motivated to get back on their feet.

A. We’ve had two overseas training sessions, first in Japan and then in China. I thought holding them abroad would be better than only doing them in Korea because it would help the players foster the ability to adapt to different weather and conditions. I also wanted to change the dour mood after the relegation, and it looks to be working. The players are responding positively.

What are you focusing on during training?

I focused on building up their physical condition in Japan and on game strategies in China. There’s been a lot of improvement. We’ve been polishing strategic aspects like passing, defense formation and offensive moves from the midfield area, and I think it’s been effective.

I heard you often joke with the players.

I make the kind of jokes where you’re not sure whether you should smile or not, and it makes the players laugh. I think they pretend to like them to impress me (laughs). I thought I could build an equal relationship between the coaching staff and the players by talking with them a lot. I prefer mingling with the players as an equal rather than having a hierarchical relationship.

Two months or so have passed since you took the helm. What kind of changes have occurred so far?

I’ve been with Gwangju for two years, so there’s been no problem getting a grasp of what kind of team this is. But I wanted to make some changes. In terms of the game, I thought we needed to improve on technical aspects.

I’ve tried to inject into the minds of the players the idea that we need to focus on midfield and passing plays. In mental aspects as well, I’ve told the players to have a higher sense of responsibility. I think we’ve resolved to play not as individuals, but as a team. If we’re promoted to the first division league again, we could raise the value of our team and our players, so I’ve tried to motivate them to win.

Do you feel any pressure about getting promoted back into the K-League Classic?

It’s true that I have a different feeling and attitude from when I was the coach of a high school team. There’s no way of having zero pressure as the coach of a professional team. But I believe I shouldn’t let the players know that I’m under such pressure. I’m just going to face my situation head-on. We have the clear objective of being promoted to the first-division league and the front office has shown the will to give us a lot of support.

What’s your philosophy in football?

I want a style of football characterized by lots of ball possession in the midfield and small passing plays. It’s a style that I’ve pursued since coaching the high school team. So far, Gwangju’s football has been assessed as being dull. I’m seeking faster and more unconventional football that fans will find interesting.

Do you have any particular teams that you’ll be watching out for in the K-League?

The Sangju Sangmu Phoenix and the National Police Agency FC have many members who previously played for the national team, but I don’t think we fall behind them. We’re going to be aggressive from the start of the season. I think it’s best to push forward from early on.