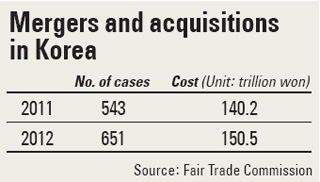 The number of mergers and acquisitions in Korea jumped nearly 20 percent last year to 651, according to the Fair Trade Commission yesterday.

There were 543 acquisitions and mergers initiated by Korean companies in 2012 and 108 by foreign firms.

Many of the mergers and acquisitions by Korean companies involved subsidiaries; such deals nearly doubled to 220 last year from 113 in 2011. For instance, Samsung Display merged with Samsung Mobile Display in May, and Lotte Shopping merged with Lotte Midopa in October.

“Due to the prolonged global economic slowdown and low sales in the domestic market recently, companies have merged subsidiaries to have more effective management,” said the commission in a release. “Such a merger is like a restructuring of the company.”

The number of merger and acquisition cases in retail jumped from 229 in 2011 to 324 last year, almost 60 percent of all cases in Korea last year.

Meanwhile, foreign-led mergers and acquisitions declined by four to 108 last year, yet the value of those cases rose almost 20 percent year-on-year to 130.8 trillion.

All in all, 28 Korean companies were acquired by foreign businesses in 2012, including 11 by Japanese and 10 by European Union companies.