12 sedans and 4 SUVs compete for Car of the Year

12 sedans and 4 SUVs compete for Car of the Year 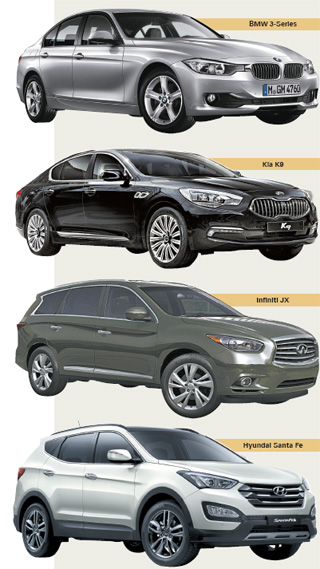 Car lovers are gunning their engines for the 2013 Car of the Year (COTY) award after final candidates were announced on Monday.

The award, hosted by the JoongAng Ilbo, is in its fourth year. For this year, 12 models including BMW’s 320d and Kia Motors’ K9 are competing in the passenger car segment, while the Infiniti JX, Hyundai Motor’s Santa Fe, Mercedes-Benz’s ML350 and Audi’s Q5 are competing for the SUV award.

The judges - 20 auto experts - looked at 63 automobiles that were introduced in Korea last year. After hearing presentations from automakers and analyzing research data, they whittled down the COTY candidates to 16. The final evaluation will be conducted late this month including road tests at the track of the Korea Automobile Testing and Research Institute in Hwaseong, Gyeonggi. The judges will pick the Car of the Year as well as winners in seven categories: best SUV, performance, environment-friendliness, design (for both domestic and imported models), driver convenience and innovation. The last two categories are new this year.

If the COTY award goes to a foreign-made model, the judges will pick a best local car and vice versa.

The 16 finalists will be displayed at COEX in Samseong-dong, southern Seoul, from this Saturday to March 2. The final result will be revealed on March 12.

Among the 16 finalists, 13 are foreign-made, showing the rising power of imported cars in Korea.

In last year’s COTY awards, six Korean cars made the finals along with nine foreign cars.

Japanese brands had a good year as six Japanese models are in the finals compared to only two last year.

Contest officials said the finalists were representative of trends in the auto industry such as engine downsizing, lighter vehicles and roomy interior designs.

Kia Motors’ flagship K9 sedan managed to qualify after earning good marks in driving performance as well as for its luxury features. The V6 3.8 GDi engine enables 334 horsepower with 40.3 kilogram-meter torque and its 8-speed automatic transmission uses a total of 127 patents.

Renault Samsung Motor’s SM3 is another Korean model on the list. Although it’s a compact, the vehicle is equipped with features customers associate with midsize sedan. Its continuously variable transmission (CVT) gives fuel efficiency of 15 kilometers per liter.

Popular midsize sedans from Japan’s big three automakers - Toyota, Nissan and Honda - have landed in the finalists. Interestingly, all of those models are made in the United States.

Toyota’s new Camry has helped the Japanese auto brand become the No. 5 best-selling foreign auto brand in Korea. The Camry was also the second-best selling imported model. The vehicle is equipped with 10 air bags and the hybrid model has fuel efficiency of 16.4 kilometers per liter (38.6 miles per gallon).

Nissan Altima, which sells for the appealing price of 33.7 million won ($31,252), has a 2.5-liter gasoline model equipped with the latest version of CVT that gives fuel efficiency of 12.8 kilometers per liter.

Honda Accord, which was the best selling foreign car in 2009, has functions like active noise control, which blocks unnecessary noise from the outside. The 2.4 model is equipped with Honda’s first direct-injected engine.

Volkswagen Passat is also on the finalists list. The German model, which has sold more than 15 million units since its debut in 1973, has 73 millimeters of additional legroom compared to previous models. Its combination of direct shift gearbox (DSG) transmission and 2.0 TDI engine is appealing to customers and a newly launched 2.5 gasoline-fueled model has 170 horsepower.

BMW’s 3-Series, which is represented by the diesel 320d and gasoline-powered 328i, is also in the list. The compact sedan’s legroom is 15 millimeters longer than previous models and is equipped with high-tech features like Head Up Display. Even though the 3-Series has 164 to 245 horsepower, its combined fuel efficiency is 19.7 kilometers per liter.

In terms of fuel efficiency, Peugeot’s 208 is the best. Its 1.4 e-HDi model can go 21.1 kilometers per liter, the best among cars sold in Korea. Even though it’s a city car, the model received five stars in the European New Car Assessment Program.

Toyota’s 86 is a rear-wheel drive sports car that is a collaboration between Toyota and Subaru. This car has 200 horsepower, but its fuel efficiency is an impressive 11.6 kilometers per liter. Its reasonable retail price compared to other sports sedans (38.9 million won to 46.8 million won) is also attractive.

The Porsche 911, which has been made since 1963, is another sports car that made the list. The seventh-generation model keeps the brand’s identity but uses high-tech materials to reduce its weight. As a result, it has 400 horsepower with 44.8 kilogram-meter torque and fuel efficiency of 9.3 kilometers to the liter.

Although it’s not a traditional sports car, Audi’s S7 has 420 horsepower and 56.1 kilogram-meter torque. It can go from zero to 100 kilometers per hour in 4.7 seconds. Its cylinder-on-demand system boosts fuel efficiency 30 percent over the previous model.

For the second year in a row, it’s one local model versus three imports. This year, Hyundai Motor’s new Santa Fe is the local finalist. (Last year it was Ssangyong Motor’s Korando C.)

The Santa Fe has been earning good grades for safety features. All models are equipped with seven airbags as well as vehicle dynamic control and vehicle stability management system. Last week, the Santa Fe was selected as the best utility vehicle of 2013 by the Canadian Automotive Journalists Association (AJAC).

Infiniti JX, a seven-seat SUV, gets good grades for a roomy interior as well as unique exterior design highlighted by a double-arch front grille.

The Mercedes-Benz ML 350 BlueTEC is a premium SUV. It has a stable driving performance, and its BlueTEC system delivers good fuel efficiency.

Audi’s Q3 appeals with its compact size and coupe-type exterior design. This car weighs only 1,700 kilograms after the German automaker was able to use light-weight materials.

Meanwhile, netizens can select their own car of the year at the COTY Web site (auto.joins.com/2013coty) until March 2. The JoongAng Ilbo will hand out gifts to 100 participants by lottery on March 4.