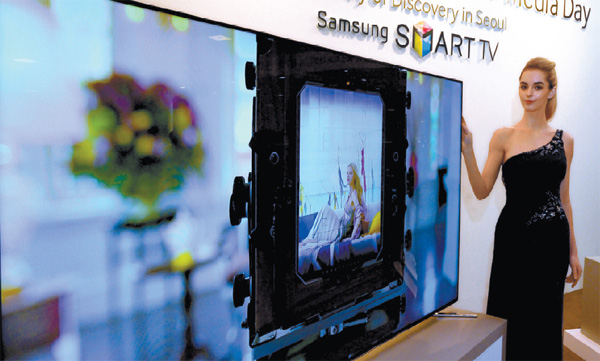 A model poses next to Samsung’s premium smart TV F8000 that was introduced at the company’s headquarters in Gangnam, southern Seoul, yesterday. [NEWSIS]

Samsung Electronics, the world’s largest television maker, will start selling TVs using a technology allowing brighter and sharper images in the first half to extend its market lead.

Samsung will introduce other smart TVs starting this weekend in Korea, with features such as voice-recognition capability and 3-D images, the company said in a statement.

Samsung and rival LG Electronics are focusing on OLED and other pricier models as unit sales slow amid a shift in consumer preference toward portable devices such as smartphones. A stronger won and a weaker yen are also increasing competitive pressure on the Korean manufacturers from Japan’s Sony and Panasonic.

“We will continue to focus on the premium segment as that’s the fastest-growing market,” Kim Hyun-suk, head Samsung’s TV operations, said. Sales in the global premium TV market will expand about 30 percent to 40 percent this year, Kim said.

Samsung’s new smart TVs that go on sale this weekend will be priced at about 5 million won ($4,636) for a 55-inch model, Park said. That compares with about 3.6 million won for an LG smart TV. Television sets using OLEDs offer sharper and brighter images than current liquid-crystal-display models and consume less power. They are also thinner as they don’t require the use of a backlight.

LG said at the beginning of the year that it started selling a 55-inch OLED set in Korea for 11 million won, giving the company a head start in mass-marketing such TVs. LG will expand OLED TV sales to North America, Europe and other Asian markets in the first quarter, it said at the time.