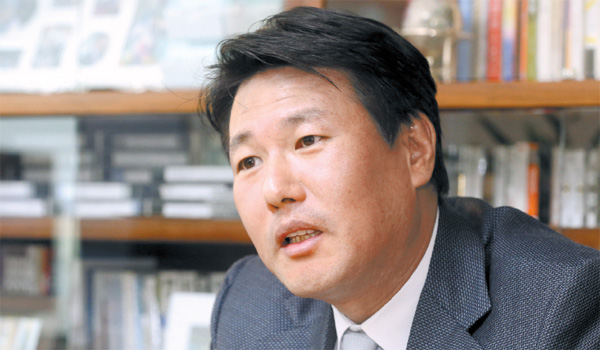 Kim Tae-hyo, former senior secretary for national security strategy, said North Korea’s nuclear capabilities are “at a much more serious level than the public perceives,” during an interview with the weekly JoongAng Sunday Wednesday.

“Pyongyang has never stopped developing its nuclear weapons, not for even a single day,” said the former presidential aide, who resigned from his post last year in the wake of a public outcry over a military intelligence pact with Japan.

“From multiple sources, I confirmed the fact that the North has been pushing ahead with nuclear technology in a bid to take Seoul hostage.”

Q. How far do you think North Korea has come to acquiring nuclear capabilities from its third nuclear test earlier this month?

A.No government officials and experts in the field can declare the North is now a nuclear-armed state. They all claim the communist state has yet to have fully acquired the knowledge to produce nuclear weapons. Nevertheless, it is an inevitable truth that Pyongyang’s nuclear capabilities are much more threatening than the public knows and are advancing every day. In order to hold Seoul hostage to its nuclear power, the Kim dynasty has not skipped developing its nuclear arms for a single day.

Some say North Korea will become a nuclear state akin to Pakistan in five to 10 years.

What it means for the North to become a nuclear state similar to Pakistan is that it could hold a dominant position over Seoul thanks to a handful of nuclear warheads.

A nuclear Pyongyang could easily gain strategic objectives against Seoul. It will go on a path toward the Pakistan model if its nuclear programs are left unchallenged.

Do you think North Korea tested a uranium bomb in its latest nuclear test instead of plutonium?

Are you implying that Pyongyang kept pursuing its nuclear ambition even following its pledge to freeze its nuclear weapons program made last February in a breakthrough agreement with Washington?

Pyongyang has never stopped developing its nuclear capabilities for the past 25 years since it began its nuclear weapons program in the late 1980s.

Despite this undeniable fact, we still hear some people arguing the North’s nuclear development program is just a bargaining chip to get what it wants on a negotiation table. They urge the government to provide aid to the Stalinist state so it will behave better. They are misleading and deceiving the public. For the Lee Myung-bak administration, I can assure the public that we tried to confront and solve the issue in a way that keeps its integrity intact.

Is there evidence to back up your claim that the North has not stopped its nuclear programs in the last 25 years?

Of course there is plenty of evidence. I just can’t reveal it as it is classified information. However, anyone will be able to find evidence by simply following through comments by North Korean high-ranking officials and tracking Pyongyang’s trade records that show exchanges of nuclear activity-related goods.

Then what could prevent the North from further developing its nuclear programs?

Through international cooperation, we may delay Pyongyang’s progress in nuclear development programs. Maximizing the Korea-U.S. intelligence to disable the North from launching nuclear warheads is also crucial. Expanding Korean ballistic missile range to 800 kilometers [497 miles] to target nuclear launch sites was part of our efforts to compromise the North’s nuclear capabilities.

Isn’t it a more realistic approach to recognize the North as a nuclear-armed state?

The nuclear capabilities held by Israel, India and Pakistan are tacitly recognized internationally because of complicated geopolitical landscape there.

The case for North Korea and Iran is different. There is no political justification in their bid to become nuclear-armed state. The international coordination and cooperation to thwart the two nations from acquiring nuclear technology will continue to the end. There are some critics blaming Washington and Seoul that the two drove Pyongyang to the brink, leaving the rogue nation no choice but to seek nuclear weapons.

Washington promised Pyongyang in a bilateral agreement it would deliver a package of nutritional aids should it follow through its nuclear moratorium pledge made last February.

The Kim regime shattered the promise two weeks later by launching a missile. The two battles of Yeonpyeong in 1999 and 2002 all took place amid the Sunshine Policy under the Kim Dae-jung and Roh Moo-hyun administrations.

Some critics argue the Lee administration’s hardline stance raised the possibility of full-fledged conflict with the North.

As long as Seoul and Washington show an unwavering resolution to fight off Pyongyang’s provocations, KimJong-un will not dare to start an all-out war. After President Lee displayed such a strong will to thwart provocations, Pyongyang never showed signs of another attack on our soil after its shelling of Yeonpyeong Island in 2010.

The outgoing Lee government is still facing criticism for its hardline stance during its five-year term.

The North Korean government has come to the realization that it could perish if Seoul continues its hardline stance. Its harsh remarks against President Lee show their anxiety. We did not only employ hardline stance, sometimes we took soft measures to make them grasp the reality.

When Pyongyang demanded a raise in workers’ wages at the industrial complex, Unification Ministry officials took North Korean officials to industrial complexes in China and Vietnam. After seeing foreign workers laboring for lower wages in a factory line where free communication and customs service were guaranteed, they withdrew their demand.

President Lee managed to maintain the operation of the Kaesong Industrial Complex during his tenure.

It got bigger. The number of North Korean employees now exceeds 50,000, a jump from 20,000 workers five years ago. After a string of provocations from the North, including the bombardment of Yeonpyeong Island and torpedoing of the battleship Cheonan, we had intra-government discussions whether we should keep the Kaesong Park running. At the end, we decided to keep it rather than close it down to give Pyongyang a window of opportunity for reform.

What additional punitive sanctions will be imposed on the militaristic state for its latest nuclear test?

North Korea will be met with financial sanctions. Financial activities of any banking institutions that are discovered to have dealt with Pyongyang will be suspended. If fully implemented, it is what the North Korean regime dreads the most. An additional measure will be to freeze accounts of financial institutions with transaction history in a third country with banks that had connections to Pyongyang. It is up to China whether the measures will produce tangible outcome.

Do you have any suggestions for the incoming government’s national security and North Korea policies?

I am not worried about the incoming administration’s philosophy toward national security and policies on North Korea. So far, it seems that the drive for reform in areas of diplomacy, defense and intelligence need to be our priority.