In farewell speech, MB says history will be judge

In farewell speech, MB says history will be judge 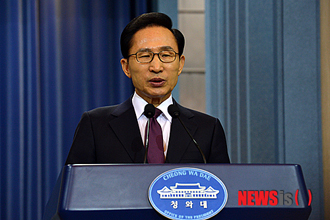 President Lee Myung-bak yesterday bid farewell to the people in a speech and asked the public to let history judge his administration’s merits and demerits.

At a press conference at the Blue House’s media center, Lee gave his final address to wrap up his five-year presidency six days before his term ends. The speech was broadcast live nationwide.

“I will let history evaluate the merits and demerits of the five years under my administration,” Lee said. “But it is clear that Korea is no longer a small country in the periphery but it became a nation standing in the center of the world and it will continue to advance.”

Lee said he will gladly serve the country after his presidential term ends and he see it as an honorable duty for the people’s happiness. He appreciated everyone who supported him during his presidency and also expressed his understanding of people who were critical of him and his governance.

He also apologized for the corruption and irregularities of his relatives and aides.

“Although I sincerely hoped to operate a government free from ethical flaws, I have troubled the people with incidents that surrounded me, and I once again apologize,” Lee said.

While many criticized the Lee administration for its hard-line North Korea policy for the frozen inter-Korean relations, Lee yesterday gave a positive evaluation. He also told the nation that Korea’s future eventually lies in unification.

“Over the past five years, the relations between the two Koreas had many internal changes, differently from what it looked like from the outside,” Lee said. “I did not use the inter-Korean relations for domestic political gains and I refrained from giving unilateral aide without actual change in the North.”

Lee said a new breakthrough will be seen if Seoul keeps the policy of cooperation with the United States and Korea’s neighbors including China.

He also issued a strong message to North Korea. “Although the North Korean regime refuses to change, the people in the North are changing fast and no one can stop it,” Lee said. “We are observing the change closely. I strongly believe that the era of unification is not far off. We need to hurry to be ready for unification. Of course, a strong security posture must be the basis for our preparation.”

Lee said he is excited to begin a life after his presidential term. “When the spring season blooms, I want to ride a bicycle and tour the mountains and rivers of our country along the four major rivers,” Lee said. He also said his signature project of restoring the rivers must continue despite controversy about its effectiveness.

Earlier in the morning, Lee hosted his last cabinet meeting and showed appreciation to the government officials.

After the press conference, Lee and first lady Kim Yoon-ok hosted a luncheon with the Blue House press corps.

At the event, Lee said he will receive Thai Prime Minister Yingluck Shinawatra at the Blue House as the last foreign guest before he returns to his home in Nonhyun-dong, southern Seoul, on Sunday.