These boys of summer are in the autumn of their lives

These boys of summer are in the autumn of their lives 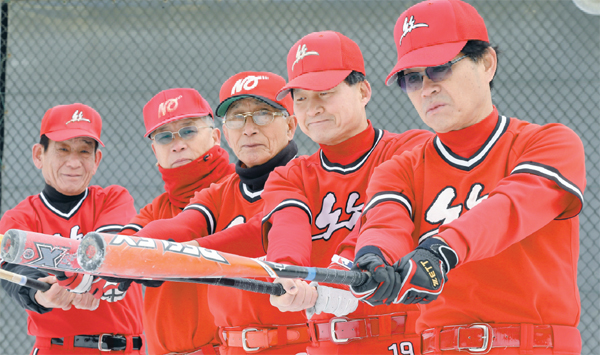 Five players of the NoNo baseball club, the country’s first silver-generation baseball team, pose with their bats during practice Tuesday at the Galsan Elementary School in western Seoul. By Ahn Seong-sik

The NoNo baseball club’s name shouldn’t be considered a double negative or a reference to pitching a no-no, which means a no-hitter in U.S. baseball slang.

The first no in the name is the English word. The second is the Chinese character for age, which is pronounced “No.”

The NoNo Club, founded in 1997, is the Korea’s first silver-generation baseball team. The oldest player on the team is 85-year-old Jang Ki-won. Jang is 31 years older than the youngest player, Lee Seong-hwan, who is 52. The team’s average age is above 60.

“People might underestimate our team because of our advanced ages,” said Park Dong-seok, the team’s coach and the sole team member with professional experience. “But we had two wins and three losses last year.”

Park said the team’s greatest strength is “good teamwork” among the players.

When the JoongAng Ilbo visited the team’s training site at Galsan Elementary School in western Seoul Tuesday, a group of gray haired players were stretching prior to a practice game.

“We make sure to conduct thorough stretches for at least half an hour at the beginning of a practices to prevent injuries,” said 68-year-old second baseman Hong Seong-yae.

“Baseball is the perfect sport for the elderly as it helps to maintain both physical and mental strength as there are many rules to follow,” Hong added.

The NoNo Club plays about five friendly matches a year with other amateur baseball teams, whose players are, most of the time, at least 20 years their juniors.

With a few weeks until the professional baseball league begins in April, the senior players have high hopes for the national team in the upcoming 2013 World Baseball Classic. Team Korea first faces the Netherlands on March 2.

“We really look forward to the international event because it’s held during the off-season,” said Lee Myung-jae, a 71-year old pitcher. “We crave it.”

“Though major leaguers such as Ryu Hyun-jin are not in the team, I am sure the national team will excel this time too just as they did in Beijing five years ago,” noted another player, Kwok Seon-kyu, 61.

The NoNo Club charges a monthly membership fee of 20,000 won ($18.57). It wishes there was more support for amateur teams like itself.

“The national baseball team does really well in international competitions against countries like Japan,” said coach Park. “But the gap between Korea and Japan in terms of support for amateur baseball club is really large. It’s not even comparable.”

“More support and attention to the amateur league will increase the number of people enjoying the sport.