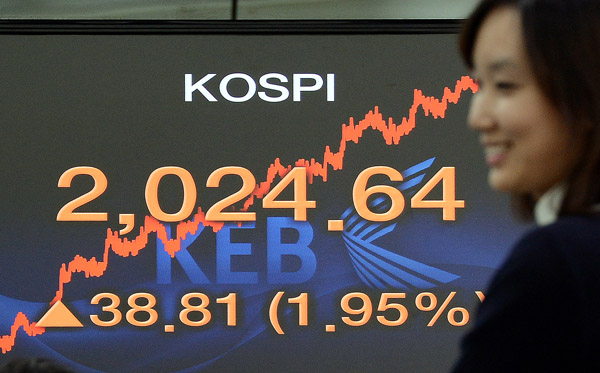 Yesterday, the market ended at 2,024.64, up 1.95 percent from Tuesday’s close, backed by positive economic recovery signs from Europe and ongoing merger deals in the United States, market observers said.

According to analysts at local brokerage firms, the Dow Jones Industrial Average rose 0.4 percent and finished at 14,035.67 yesterday, getting closer to its record of 14,164.53 set Oct. 9, 2007, on news that the German economy is picking up steam and growing anticipation of more mergers ahead after U.S. media reported that office supply giants OfficeMax and Office Depot are in talks.

“The German ZEW survey’s economic expectations index for February increased to 48.2 which is much higher than a projection of 35, and the highest level recorded since April 2010,” said Jeong Dong-hyu, an analyst at Eugene Securities. “Together with ongoing M&A talks in the United States, these factors have provided an upbeat atmosphere and restored investor confidence here as well.”

Market experts said yesterday’s surge in the Kospi suggests the beginning of the end of the local market’s decoupling from global stock exchanges.

When the Dow Jones Industrial Average surged 3.45 percent and the Nikkei 4.69 percent in January, the Kospi fell 1.37 percent on the heels of a Vanguard Group decision to sell off its Korean stocks over 25 weeks as it switches its benchmark for emerging market funds, a continued weakening in the Japanese yen and disappointing fourth quarter results for exporters.

Analysts suggested the Kospi could go as high as 2,100 in March.

“This is the third time the Kospi decoupled from other markets, and considering the two precedents, the decoupling phenomenon would last for one or two months,” said Choi Sung-rak, a researcher at the Korea Center for International Finance. “This is because the speed of the won strengthening and yen weakening is easing.”

“The Kospi index improved because shares of most companies that saw the steepest drop in January began to pick up in February,” said Lee Jae-man, an analyst at Tongyang Securities. “Foreign investors are likely to resume their buying rally of Korean stocks and the Kospi could reach as high as 2,090 in March if there are no external shocks.”

Other market observers, however, cautioned that it’s a bit early to judge the comeback of the Kospi, as uncertainties in overseas markets persist with about 90 billion euros of Italian bonds due to mature between now and April in addition to ongoing sequester negotiations in the United States.

“President Barack Obama has pressed Congress to extend the March 1 deadline for automatic across-the-board spending cuts,” said Jeon Ji-won, an analyst at Kiwoom Securities. “Democrat Erskine Bowles and former Republican Senator Alan Simpson have suggested an alternative proposal to reducing the deficit by $2.4 trillion over 10 years. Given that the White House wants to reduce the deficit by $1.5 trillion, it will take some time until they reach a compromise. This adds uncertainty in the local bourse.”