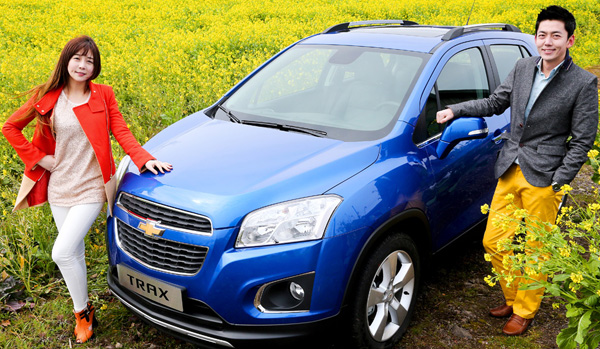 The Trax is expected to compete with Hyundai’s Tucson and Kia’s Sportage. Provided by GM Korea

The vehicle is the first small SUV from GM’s global vehicle development program, the product of 60 months of engineering by the team based in Incheon.

“We expected to generate fresh momentum with this model,” said Ankush Arora, GM Korea’s?vice president of sales, service and marketing. “You can call the Trax the most ‘Gangnam Style’ vehicle in Korea.”

Trax is the first domestically made vehicle with a 1.4-liter turbocharged engine, which produces up to 140 horsepower and 20.4 kilogram-meters of torque.

The SUV comes with six air bags standard and is equipped with electronic stability control and traction control, hydraulic brake assist and hill start assist. The Trax will be available in four trim levels priced from 19.4 million won ($17,945) to 22.89 million won. The company hopes to target buyers in their 20s and 30s.

“We set the price based on the philosophy of Chevrolet, which is to give very best value to customers,” said Arora.

The vice president said Trax will compete with Hyundai Motor’s Tucson and Kia Motors’ Sportage. Although Arora didn’t divulge a specific sales target, he said pre-orders are rushing in. The Trax will go on sale nationwide Monday.

The Trax, manufactured at the Bupyeong Plant in Incheon and in Mexico, is expected to be sold in more than 140 countries.

Arora said although the company can’t reveal annual production volume for the Trax, Korea will be will be the largest production base.