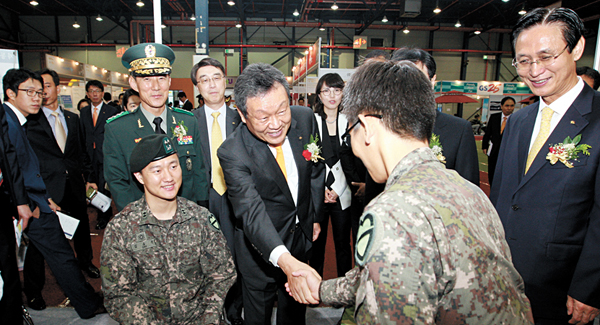 Immediately following his inauguration in July 2010, Chairman of the group, Euh Yoon-dae, set out on visits to the country’s various SMEs and discussed with heads of the enterprises about working together for shared growth and to fight the challenges that lie ahead. Last September, Euh visited the Busan Chamber of Commerce and Industry and consolidated plans for concerted efforts for shared growth strategies.

A measure Euh is pursuing by lending a helping hand to the SMEs is the so-called KB Hidden Star 500 program in which blue-chip companies with strong growth potential and advanced technology are selected for support from KB. The benefits include comprehensive services from KB Kookmin Bank, extended credit limit, preferential rates for loans and discounts on financial transaction fees of various sorts.

While the current trend in terms of lending to SMEs is on the downward slope, KB’s loans for medium-sized enterprises in 2012 as of July was up 3.8 trillion won at 68.7 trillion won ($63.5 billion).

In addition to financial support, KB Kookmin Bank is continuing to offer its consulting services to the SMEs. From August 2006 to December 2011, it has conducted over 400 consults. KB Wise Consulting has expanded the areas of consultation to include family business inheritance as well as human resources and performance evaluation and internal management. Instead of stopping short of offering advice, KB considers feedback just as important, as the consultant in charge will continue with contacts with the companies via phone calls and e-mails for follow-up consultations as needs arise. Meanwhile, KB Financial Group is also participating in the society-wide efforts to create new jobs and alleviate human resources challenges within the SMEs.

The KB Goodjob is KB’s employment information project launched in 2011. In just two years since the launch of this ambitious program, it has garnered more than 30,000 subscribers, who are given access to job-related information of some 12,000 local firms. The job market information is reliable as it is derived from the established network of KB Financial Group.

As of the end of last year, 12,000 companies and 30,000 job seekers registered at KB Goodjob, and more than 16,000 posts were announced. Some 44,000 jobs were posted through the KB Goodjob. KB Financial Group assessed that by using the reliable network the group has consolidated in the financial industry, it will be able to contribute to alleviating the labor shortage and difficulty in finding jobs by ironing out differences in expectations through circulation of information.

In March 2011, it inked an agreement with the Ministry of Education, Science and Technology and is exploring job opportunities for high school job seekers. On KB Goodjob’s Web site (www.kbgoodjob.co.kr), job information for specialized high school graduates is aggregated.

In June 2011, the KB Goodjob consulting committee, organized of 11 job consulting experts, kicked off a project and started to offer online employment consulting. Especially through business ties with the Korea Chamber of Commerce and Industry, which co-hosted the job fair in 2011, specialized information like profiles of companies were made available. The 2012 KB Goodjob Outstanding Enterprise Job Fair, that also helped some discharged military officers, was held giving hope to those who have dedicated their time to serve the country.

In addition to jobs, the KB Financial Group’s largest subsidiary KB Kookmin Bank has launched the Saeheemangholssi Loan, or Seed of New Hope Loan, starting in November 2010, which is a 10 percent interest rate loan for low-income and financially neglected classes.