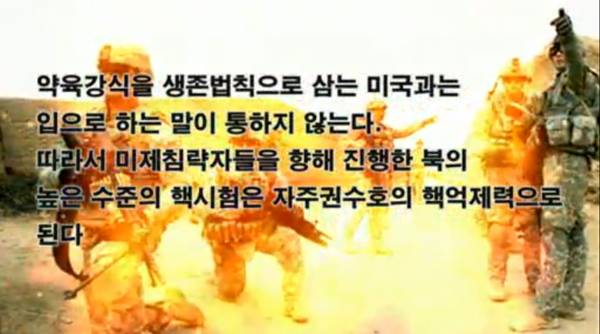 A screenshot of a video that North Korea’s propaganda organ uploaded on YouTube shows images of American troops in flames. The 1-minute-33-second clip also shows an image of a nuclear explosion. Subtitles read: “North Korea conducted a nuclear test at a time when the U.S. has been acting unfairly.” [NEWSIS]

A North Korean diplomat warned South Korea Tuesday that Seoul’s “erratic behavior” will only risk its “final destruction,” and threatened additional “steps” against the U.S. following its recent nuclear test.

“As the saying goes, a new-born puppy knows no fear of a tiger,” said Jon Yong-ryong, an envoy from Pyongyang, at a United Nations Conference on Disarmament in Geneva, Switzerland. “South Korea’s erratic behavior would only herald its final destruction.” 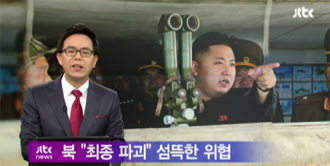 “If the U.S. takes a hostile approach toward the DPRK [North Korea] to the last, rendering the situation complicated, it [North Korea] will be left with no option but to take the second and third stronger steps in succession,” Jon said.

Adding to those threats, a video was uploaded on YouTube yesterday using the ID Uriminzokkiri, the North’s propaganda Web site.

The 1-minute-33-second video showed images of American troops in flames and an image of a nuclear explosion. Subtitles read: “North Korea conducted a nuclear test at a time when the U.S. has been acting unfairly. The U.S. has no respect for others or for equal treatment.”

A similar video set to the song “We Are the World” was uploaded earlier in the month that showed a missile attack on a U.S. city and the reunification of Korea.

The threats came more than a week after North Korea conducted its third nuclear test. The nuclear test followed a long-range missile launch by the North in December, after which the United Nations Security Council adopted Resolution 2087 that expanded sanctions against the regime and warned of “significant action” if the North engages in additional provocations.

Seoul’s Ministry of National Defense did not comment on the North’s new threats.

“We don’t have an official response,” said a ministry official.

Kim Young-ho, a professor at the Korea National Defense University, dismissed concerns that North Korea may be ready to actually deploy nuclear weapons.

“Considering the current nuclear development status in North Korea, the regime isn’t at the stage where it can use them against us,” Kim said. “Even conducting ballistic missiles tests doesn’t mean [the North] is ready to actually launch attacks.”

Kim said that the “second and third steps” mentioned by Jon at the international meeting could refer to local provocations like the shelling of Yeonpyeong Island in November 2010 or additional missile tests.

Analysts noted that the North’s warning may be aimed at a two-day South Korea-U.S. Integrated Defense Dialogue meeting set to be held in Washington starting today.

“The two will evaluate the North Korean situation after the nuclear test and discuss ways to cooperate in drawing up policies on the North,” the Defense Ministry said in a statement yesterday.