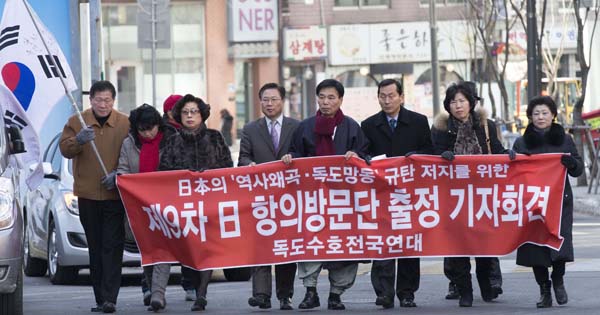 A group of Korean civic activists who volunteer to defend the Dokdo islets are on their way to a press conference yesterday to announce that they will visit Japan to protest against Japan’s claim to Dokdo, called Takeshima in Japan. Japan has stepped up its claim to Korea’s easternmost islets. By Ahn Seong-sik

Seoul and Tokyo sparred over Dokdo again yesterday, with Japan’s ruling party claiming it was trying to be sensitive to Korea over the issue.

On Tuesday, Ministry of Foreign Affairs and Trade spokesman Cho Tai-young asked the Japanese government to cancel a Takeshima Day event scheduled for tomorrow following reports that Aiko Shimajiri, a vice-ministerial official and a member of the upper house of the Japanese Diet, will attend. Takeshima is Japan’s name for Dokdo.

If Shimajiri takes part in the annual event, it will be the first time a government official attends. In 2005, Shimane Prefecture designated Feb. 22 as Takeshima Day to strengthen Japan’s territorial claims to the Dokdo islets. Yesterday, a far-right politician from the ruling Liberal Democratic Party said that the decision was made in consideration of Korea.

“The fact that we are celebrating Takeshima Day as a local [prefectural] event and sending a government official there instead of having the central government host the event is a result of [us] giving maximum consideration to Korea,” Shigeru Ishiba from Japan’s LDP was quoted as saying by Kyodo News. “Though the dates of the Korean president’s inauguration ceremony [on Monday] and Takeshima Day are very close, it is necessary that we present to the people and others [about the day] because it is related to our national sovereignty.”

“Japan should not hold what they call the Takeshima Day event,” Cho told reporters Tuesday. “It would be going against history to hold such an unjust event and have a government official participate in it.”

The spokesman said Dokdo is “clearly our indigenous territory that is effectively controlled by us.”

In December, Korea warned Shimane Prefecture that the event was “unacceptable.” Despite the warning, some 18 lawmakers including Shimajiri are reportedly expected to attend.

Relations between Seoul and Tokyo reached a recent nadir last August when outgoing President Lee Myung-bak visited Dokdo for the first time as president. Japan immediately protested, sending a request to Korea that the matter should be taken to the International Court of Justice. Korea rejected the request denying a territorial dispute because the Dokdo islets are “clearly part of Korean territory.”

“The Japanese government shouldn’t send a high-level official from the central government to an event hosted by a local government,” said Hwang Woo-yea, head of the ruling Saenuri Party yesterday. “It should take measures so that the local government calls off the event.”