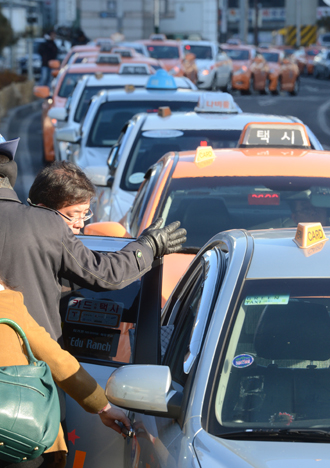 Even though an association of taxi companies planned a one-day strike yesterday, many cabs wait for passengers yesterday morning near Seoul Station. [NEWSIS]

Some taxi drivers in the country went on a one-day strike to urge legislators to repass a taxi bill that would give them trillions of won in government subsidies, but many taxis worried about the government’s warning of cutting back fuel subsidies and did not join the protest.

It ended without much inconvenience to commuters.

On Tuesday, the leading groups of the taxi industry, including the Korea National Joint Conference of Taxi Association, said they would go on a one-day strike in order to urge the National Assembly to repass the bill of designating taxis as mass transportation.

They said they will hold a general meeting in Yeouido, western Seoul, and all taxis nationwide will stop operating for 24 hours from 5 a.m. yesterday.

“Most corporate taxis came out to work,” a taxi driver in Seoul told the JoongAng Ilbo. “The drivers who went on strike are mostly private taxis.”

According to a taxi company in Gangseo District, western Seoul, the Ministry of Land, Transport and Maritime Affairs sent an official warning on Tuesday night that said it would cut the fuel subsidies it has been supporting for the next three months if the taxis go on strike.

The Transport Ministry said 31.2 percent of the country’s taxis went on strike as of 1 p.m. yesterday, an increase of 10 percentage points from 20.7 percent as of 6 a.m.

It explained that the participation rate of Seoul taxis impacted the number because only 200 taxis, or 0.02 percent, of the city’s taxis went on strike at 6 a.m., but the number increased to 16,682 by 1 p.m.

“More taxis went on strike because drivers in Seoul participated in the rally that was held at 2 p.m. in Yeouido,” a spokesman of the Transport Ministry explained.

“It generates a 30 to 40 million won [$37,093] loss to a taxi company if 100 taxis do not operate,” said Kim Dae-hyun, a taxi driver. “Though we join the strike, we still were told to pay our portions of our daily earnings, which is about 100,000 won. The taxi law is not in the interest of taxi drivers hired by taxi companies, because we already know that those government subsidies will go into company owners’ pockets.”