Arnold Schwarzenegger is ... you know

Arnold Schwarzenegger is ... you know

Arnold Schwarzenegger, making his first visit to Korea as an actor, said filmmaker Kim Jee-woon’s directing style reminded him of a psychologist. [NEWSIS]

Arnold Schwarzenegger said he’d be back. Ten years after his last starring role, the former governor of California is fulfilling the iconic statement with “The Last Stand”, an action thriller directed by Korean Kim Jee-woon, who is making his Hollywood debut. The action hero touched down in the director’s homeland on Wednesday to promote the film. He discussed his return to the acting career he put on hold to assume the governorship of California, his relationship with Kim and how his experience as governor affected his performance on the film, which opened yesterday nationwide.

Q. How do you feel about coming back to Korea?

A. It’s wonderful to be here. Whenever I came here, I said, ‘I’ll be back.’ And I keep the promise now. I came here as a bodybuilder and later as governor of California. Now, it’s wonderful to be back again as an actor, especially an actor that was directed by extraordinary South Korean director Kim Jee-woon.

What made you choose “The Last Stand” as your comeback movie? 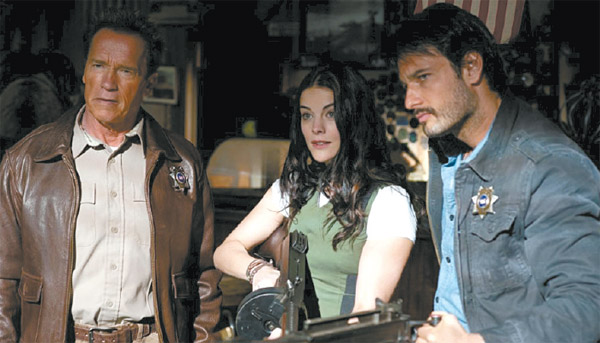 “The Last Stand” is Kim Jee-woon’s first English film and Schwarzenegger’s first after a 10-year hiatus from being a leading man. Provided by 20th Century Fox

You always, as an actor, try to choose a project that could be popular not only in America but all over the world and a story that could be understood by everybody. So, I think that “The Last Stand” has that. It has a great story of a man who was once an action hero then has gotten lost along the way, but has come back. The idea of a vulnerable character was very appealing to me. But what really made me decide to do the movie is the fact that Kim Jee-woon directed the film. I admired his movies a lot, especially the last movie, “The Good, The Bad, The Weird.” It was full of extraordinary directing and great visuals. We met at my house several times to talk about the character and what the story would be like. I came to have extraordinary respect for his work and vision. More importantly, we had mutual respect.

Age is mentioned in the movie. Did you feel any physical challenges while shooting the film? If not, how do you constantly stay in shape?

I work out every day. I work out on cardiovascular training and weight training. Working out is a part of life.

Many other Korean actors and directors are making their Hollywood debut. How do you feel about the trend?

Millions and millions of people from around the world want to go to Hollywood to become a movie star, director or financier. But there are few of them who are lucky enough to make it. Director Kim Jee-woon was one of them and I was very fortunate to make it there. But there are millions of others who couldn’t. The only thing I recommend is you have to have a very clear vision. And you have to be willing to fail over and over until you make it.

Hollywood always looks for new talents, new visions and new styles of directing. And I think Kim Jee-woon is definitely one of them who has been discovered.

What was it like working with a director who was outside of the Hollywood system? Were there any challenges working with a non-English speaking moviemaker?

I love the style of the director. He will do the master shot when everyone has done things, then he is moving closer. After that, he will move closer into a main actor and then move even closer into the main actor’s face with the camera. And then, he starts directing and saying things like, “I need more sadness in your eyes.” He is moving closer and closer to get into your brain. He is almost like a psychologist to pull out such emotions.

When it comes to communicating, I had no problem whatsoever. We had a terrific translator. But more importantly, most of the time, I didn’t need any translation because Kim has a very passionate way of explaining things, actually acting out the scene. Many times, he tried to get himself into trouble when he tried to do the stunt for you.

How did your experience as a governor affect your acting?

The governor’s office is the greatest class room that you can find because it’s educational time. So, the experience might contribute to making you a better performer. But, in the end, it is always a director who is responsible for that.