Stars come down from the north for Seoul show

Stars come down from the north for Seoul show 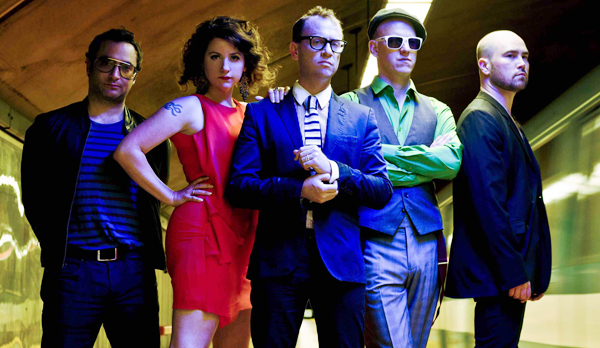 It’s a season of Canadian music in Seoul. Sandwiched between Japandroids earlier this month and Grimes in March, longtime indie favorites Stars are coming to town today.

The indie pop band started in Toronto and then moved to Montreal, where they’ve been making their melodic, delicate-yet-dynamic songs ever since.

The band is known for creative instrumentation and powerful vocals. On the standout track from 2004’s “Set Yourself on Fire,” the song “Your Ex-Lover Is Dead” opens memorably with horns, violin and guitar, before a harmonica part leads into Torquil Campbell’s first verse.

The lyrics are full of romantic, but not saccharine, imagery. Second singer Amy Millan takes over the next verse, and what’s remarkable about the song is the way they keep progression reined in. Campbell comes back and they slow the song down to a soft, breathy bridge, until finally the drums take over and they let the horse run.

TV shows seem to really like Stars. Their songs have been featured on “Alias,” “The O.C.,” “Gossip Girl” and “The Vampire Diaries,” among others.

Their sixth album, “The North,” was just nominated for Alternative Album of the Year in the 2013 Juno Awards. Millan took some time out of Stars’ international tour - Prague to Manila, Australia and then Seoul - promoting the “The North,” to answer some questions via e-mail for the Korea JoongAng Daily.

This is the band’s first time in Korea, and Millan said they are quite excited.

“We always really look forward to the cuisine,” she said. “It’s so fascinating how different it is from culture to culture. We are more like a food show than a band. We’ll be seeking out your top culinary spots. Also looking forward to some great shopping.”

The band released a free EP for the Asia and Australia tour called “Far From Home,” which can be found on audio-sharing site Soundcloud (soundcloud.com/youarestars/sets/far-from-home-ep).

“This is just a gift to our fans who have been coming out to the shows,” Millan said. “We are in a prolific stage right now and we just want to keep writing.”

The band is known for writing often about sex and death.

“They are our muses. The best and worst of life,” Millan said. “They drive our creative life.”

Millan has worked with a number of other projects in Canada and other places, most notably with Broken Social Scene.

“I am lucky to be asked to participate in a number of projects, but since I had a baby I find it difficult to say yes these days,” she said. “The latest person I’ve started writing with is a DJ from the U.S. called Porter Robinson. We’ve collaborated on a couple songs, and I think he is very talented.”

Songs on “The North” follow in the tradition of the band’s strongest material.

“Stars mandate is always to try to write the best pop song possible,” Millan said. “We believe in hooks and take deep pride in melody and lyrics. We want to connect with the listener. We want to tell you a story you didn’t even realize was your own.”

They’ve played a lot live over the years. When asked what to expect from a Stars show, Millan said, “Energy! Dancing! Passion! We are renowned for our frenetic, exciting live shows. We give everything we have for the two hours in the day we get to be on stage. We have come a long way to play for you. We really hope to see you there.”