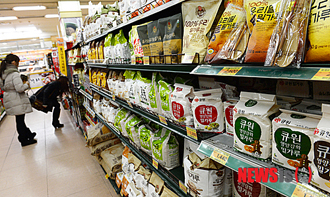 The threat of deflation is hanging over the Korean economy as the appreciation of the won pushes down prices. But not for food, as companies move to raise price tags on everything from flour to kimchi before the Park Geun-hye administration settles in.

“Many companies consider the transition period between the two administrations as an opportunity to raise prices of goods,” said an industry source, who requested anonymity.

“Once the Park administration is in office, the government is likely to try to control prices.”

Alcoholic beverage manufacturer Hite-Jinro was one of the first companies to act, raising the price of its main soju product Chamisul by 8.19 percent on the Saturday after the presidential election. 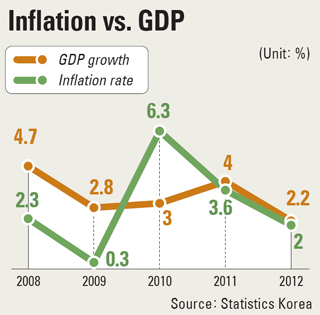 Other products that cost more as recently as Monday are flour, about 9 percent higher, and red chili paste and gochujang, up 7 to 8 percent. The flour increase is expected to be felt in other products, such as bread and instant noodles.

One of Korea’s culinary staples also costs more. Daesang FnF, which has the largest share of the market for packaged kimchi, increased its prices by 7.6 percent a week ago.

Pulmuone also raised prices for packaged tofu and kimchi by about 7 percent, as did CJ CheilJedang and Sampyo for soybean products and bean paste.

Food companies cited rising prices of commodities, including rice and wheat in the international market.

“The principle costs went up so high we had no other choice but to raise prices for manufactured goods,” an industry official said.

The recent increases in prices of soju and food staples come at a time when many see the Korean economy entering a period of deflation as the Lee Myung-bak administration successfully held the line on inflation.

In the past three months, consumer prices grew at an annual rate of about 1 percent, far below the central bank’s target of 2.5 percent to 3.5 percent.

After the election five years ago, the Lee administration set economic growth as its top priority. As the global market swirled into an unprecedented credit crisis that started with the bankruptcy of Lehman Brothers, the Lee administration lowered interest rates to all-time lows and flooded the market with liquidity, which feeds inflation.

By the time the economy started to recover, the annual inflation rate was approaching the maximum target of 4 percent.

In 2010, Korea’s GDP surged to 6.2 percent from 0.3 percent in 2009; at the same time, the inflation rate was 3 percent. The following year, GDP fell by nearly half to 3.2 percent, while consumer prices continued rising to 4 percent.

However, the 4 percent growth was a revision downward from 4.4 percent under a formula adopted by the Bank of Korea at the end of 2011. The bank said the new system produced a more accurate reflection of consumer price movement.

Nonetheless, the government was being blamed for failing to control inflation, and the Lee administration shifted its focus to pressure industry not to increase prices. Refiners were one of the main industries under the government microscope. As refiners maintained prices against the backdrop of cheaper crude on the international market, the FTC and other agencies quickly looked into the possibility of price fixing and any other illegal practices.

Retailers were next in line, as the government agencies searched for similar business malpractices.

The goal was to prevent companies from raising the prices as part of the larger campaign to hold the annual inflation rate to between 2 and 4 percent.

As a result, most companies have been watching from the sideline as international commodity prices go up. Especially as the United States, Europe and, most recently, Japan flood the market with currencies to avoid deflation, inflationary pressure has been piling up.

The Japanese prime minister recently said the main purpose of the depreciation of the yen was to move the country forward after two decades of deflation.

In Korea, government attempts to control inflation have pushed the economy to the brink of deflation.

In contrast to the rise of food prices since late December, most durable goods have been getting less expensive.

Television prices were down 12.8 percent year-on-year last month, while the price of mobile and multimedia devices fell 13.2 percent. Laptops and computers were 8.5 percent less, while automobile prices were down 2.1 percent.

With the Korean currency continuing to appreciate against the dollar, deflation pressure continues to grow. Experts say that could derail the economy as it tries to get back on track and start a vicious cycle as consumers refrain from spending in anticipation of prices dropping further at a time when companies need robust sales.

“Companies will shrink their investments, which could retard the nation’s economic recovery,” said Oh Jeong-geun, a professor at Korea University.

In fact, the last time the annual inflation rate fell below 2 percent was 13 years ago.

Caught between deflation on the one hand and increasing prices for food on the other, Korea’s economy will face even longer odds of achieving GDP growth of 2.8 percent for 2013 as forecast by the central bank.

The price increases by manufacturers prompted the antitrust agency to launch an investigation into price fixing and unfair business practices.

The FTC also is looking for any evidence of unfair trade practices by major retailers E-Mart, Lotte Mart and Homeplus.