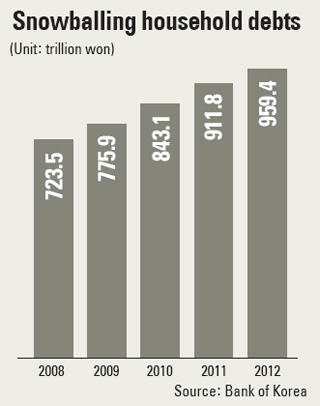 Growth of combined household debt slowed to 5.2 percent in the fourth quarter of 2012, compared to 5.4 percent in the third quarter, extending its year-on-year slowdown to six consecutive quarters.

“The demand for mortgage loans spiked due to the government’s temporary housing tax benefit, which exempted real estate transaction taxes, including an acquisition tax, until at the end of last year to boost the frozen property market,” said Lee Jae-ki, an official at the Bank of Korea.

Market observers said although the growth rate of household debt has slowed since the third quarter of 2011, the quality of loans has deteriorated because more people with bad credit have borrowed from loan sharks, insurance firms and credit card companies at high interest rates.

Loans taken out at these other non-bank financial institutions reached 240.7 trillion won in the last quarter of 2012, up 8.5 trillion won from the previous quarter.

With household loans continuing to break records, the government has been working hard to stem the growth by allowing loans to be repaid over longer terms and lowering interest rates for borrowers.

Experts warn that a rapid rise in household debt could send a shockwave through Asia’s fourth-largest economy because it would damage the financial soundness of households and reduce their ability to repay. Financial institutions might suffer from snowballing bad loans and business hurt by sluggish consumer sales.

In a separate but related matter, Lee Han-gu, floor leader of Saenuri Party who is a close aide and economic mentor to President-elect Park Geun-hye, said the Park administration will likely make household debt a top priority along with the stagnant real estate market.

“There are way too many bubbles in real estate market,” Lee said in a meeting with officials at the Korea Employers Federation yesterday. “Efforts to boost the market are insufficient. If a poor real estate market and household debt correlate with the overseas situations such as the euro zone debt crisis, this would become a big problem. The next government urgently needs to cope with these potential risks.”