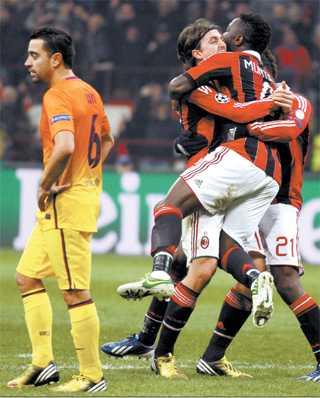 AC Milan’s Sulley Muntari of Ghana leaps into the arms of teammates Riccardo Montolivo and Kevin Constant (21) after he scored during a 2-0 defeat of FC Barcelona at the San Siro stadium in Milan, Italy on Wednesday. [AP/NEWSIS]

MILAN - AC Milan stunned Barcelona 2-0 in the first leg of its Champions League last-16 tie on Wednesday, beating the Spanish giant for the first time in eight matches.

Barcelona players protested but to no avail and Gerard Pique was booked in the process.

Sulley Muntari sealed the win nine minutes from time with a well-worked goal.

Lionel Messi, kept quiet by Milan, had two late chances from free kicks and sent both shots well over the crossbar.

The result was a massive boost to Milan’s turnaround from a dreadful start to the season. Massimiliano Allegri’s side was 15th in the Italian league after eight games but has risen to third.

It still went into the home match as a firm underdog against a Barcelona side which has lost only twice all season in the league and in Europe.

“I think it was a great game,” Allegri said. “The lads deserved this win. We didn’t concede anything in defense, and we had several chances. But it wasn’t perfect, we were a bit lacking with the last ball in the first half but the team grew in the second. I think this is an important victory which will put us through. We could even have won 3-0, but I understand tiredness set in a bit.

“This is everyone’s win, the players who played, those who didn’t, the staff .?.?. everyone.”

“It was harder than usual for us to score,” Barcelona assistant coach Jordi Roura said.

“Milan was very organized, very strong in defense and that caused us a lot of problems. We were also playing on a pitch that wasn’t worthy of this competition. We controlled in the first half, we didn’t create chances but neither did they. Then their first goal really hurt us and it was then even harder.

“If there is a team that can come back it is us. This result isn’t disastrous. It’s really awful to lose 2-0, really bad. But I think this squad deserves faith. We are convinced we can progress, because we are playing at home [next month], because our fans will support us, and because we’re playing on our pitch, which is a pitch worthy of this competition.”

While the teams knew each other well having played each other four times last season, this was a much-changed Milan side after losing experienced players such as Zlatan Ibrahimovic, Thiago Silva, Alessandro Nesta and Clarence Seedorf in the offseason. AP