Automaker closes in on a milestone

Automaker closes in on a milestone 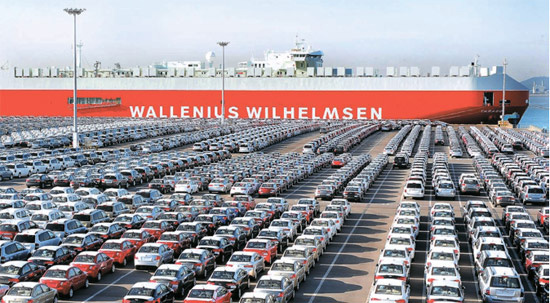 In 1975, Kia Motors shipped 10 Brisa pickups to Qatar, and a year later, Hyundai Motor exported six of its Ponys to Ecuador.

Thirty-eight years later, combined overseas sales of Hyundai and Kia, which fall under same umbrella of Hyundai Motor Group, are en route to surpassing 50 million vehicles sold worldwide by the end of this month.

According to the nation’s largest auto group, the accumulated overseas sales of Hyundais and Kias were 48.33 million units at the end of last year and will exceed the 50 million milestone as the companies now sell 500,000 to 600,000 units per month overseas.

“The figure has special meaning as we overcame our weak industry base from the past and business barriers from other advanced automotive countries,” the company said in release. “It also proves that Korea’s auto industry has positioned itself at the center of global auto industry.” 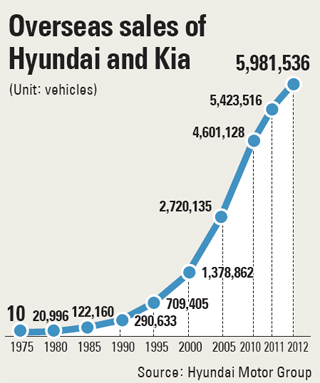 Based on the length of Hyundai’s popular compact sedan Avante, the 50 million vehicles sold would circle the earth 5.7 times and cost about 900 trillion won ($829 billion), roughly 2.6 times more than Korea’s budget this year.

Korea last year produced total of 4.56 million vehicles, fifth most in the world. As other top nations like China, the United States, Japan and Germany maintain production volumes and solid domestic market bases, Korea is the only one among top five auto producing countries that exports 60 percent of its total production.

Hyundai said that establishing a global portfolio of production also has been a driver of sales. Hyundai Motor Group Chairman Chung Mong-koo has pushed to set up factories overseas since 2002 in a bid to overcome trade barriers and satisfy the tastes of local customers.

According to the data from Korea International Trade Association, auto exports (including parts) generated revenue of $71.8 billion last year, about 13.1 percent of the nation’s total exports. In terms of profitability, auto industry was in the black at $61.7 billion, up 5.8 percent from 2011. In contrast, the nation’s total profit from trades declined 7.5 percent year-on-year to $28.5 billion in 2012.

“Our achievement was done by not only us, but with the help of everyone in the industry,” an official from Hyundai said. “We just want people to know that Hyundai is putting its best effort into the continuing development of Korea’s auto industry.”