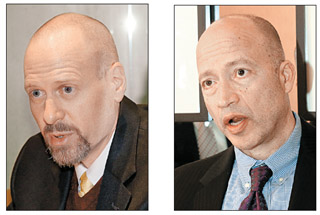 While Korea and the United States have been in clear disagreement over the implementation of a technology so-called pyroprocessing to recycle Korea’s spent nuclear fuel, two American nuclear scientists openly stated that Washington will eventually allow Korea to use the technology for efficient purposes.

“I don’t work for the government, but I believe it would be just horrible, an unfortunate situation if Korea can’t pursue these technologies [of pyroprocessing] which are indeed for peaceful application in Korea,” said Hussein Khalil, director of Argonne National Laboratory’s Nuclear Engineering Division, in an interview with the JoongAng Ilbo on Tuesday.

“I hope that Korea will have an unlimited ability to develop and use these technologies.”

Pyroprocessing is a high-temperature technique in which fast reactors separate high-level waste from spent nuclear fuel for recycling purposes. It does not separate pure plutonium, which is one of the big concerns that have been raised by the U.S.

Khalil, a fellow of the American Nuclear Society, and William Charlton, an associate professor in the nuclear engineering department at Texas A&M University, who also serves as director of the school’s Nuclear Security Science and Policy Institute, were in town earlier this week to attend the Asan Nuclear Forum hosted by the Asan Institute for Policy Studies.

The two nuclear experts sat down with the JoongAng Sunday on the sidelines of the forum and shared their views on ways of handling Korea’s spent fuel.

Some 200 leading nuclear scientists, engineers and policy analysts from around the world attended the two-day forum that ended on Wednesday.

Korea and the U.S. are under negotiations on the revision of their bilateral nuclear cooperation agreement that expires in 2014. The feasibility of pyroprocessing is one area that is being explored. The Atomic Energy Agreement with the U.S. was first signed in 1974 and does not allow Korea to process spent nuclear fuel. Korea has expressed the need of implementing the pyroprocessing technology to recycle spent fuel but the U.S. has been reluctant to discuss the issue because there is a potential for use in weapons development.

“What I believe we’ll eventually go for is [that] the U.S. will probably allow pyroprocessing in Korea,” said Charlton. “We will probably not allow enrichment.”

There are concerns about what can be done with the technology.

“Some of the questions about keeping this technology from getting into the wrong hands, these are difficult questions,” Khalil said. “I’m not an expert on some of those issues, but I understand why they create concern and lead to discussions.”

The two experts noted that to brush off concerns, a safeguard system can be developed.

“The important thing to realize is that any kind of nuclear technology requires safeguards in order to be implemented and to reduce the possibilities that materials would be misused either for weapons and nonpeaceful applications,” said Khalil. “Safeguards of pyroprocessing is an essential part of using these [safeguard] systems.”

“I fully believe that it can be safeguarded,” Charlton said. “It’s simply the question of developing the technology and implementing it.”

Charlton added that there could be a benefit and collaboration between Korea and the U.S. in developing safeguards.

“The U.S. has been studying safeguard technology for fast reactors for many years now, including a safeguard system we’ve deployed in Japan and other places,” he said. “That could be a significant benefit for Korea to have that access to the technology through an agreement with the U.S. and Korea.”

Recycling spent fuel has been an urgent issue for Korea considering the limited space it has in temporarily storing highly radioactive waste. Holding areas are expected to reach full capacity around 2016, and Seoul has been examining ways to find a more permanent solution. One of the ways Korea has been looking into it is pyroprocessing, which reduces the size of the spent fuel.

“[Compared to the U.S.], in the case of Korea, the land area is more restricted and so recycling spent fuel and processing the waste from it can significantly decrease the volume of waste that you have to deal with,” Charlton said. “Also, the heavy water reactors that you have produce a large volume of spent fuel per unit energy than it generates.”

As for the time frame, Khalil suggested that the design of the prototype reactor of the fast reactor used in the pyroprocessing process can be completed in just a few years.

“Licensing could be a challenge because it’s a different type of reactor and different set of safety considerations,” Khalil said. “But we’re talking about a few years to design and license such a reactor operated as a prototype and probably be ready for commercially viable, scaled-up technology by about 2030.”