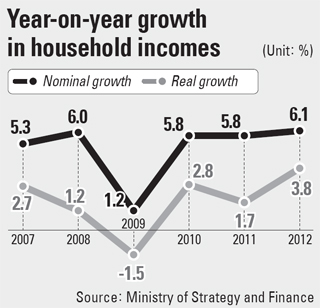 Despite continued annual growth in incomes in 2012, household spending lagged.

According to a report by Statistics Korea and the Ministry of Strategy and Finance yesterday, households’ monthly income averaged 4.08 million won ($3,745) last year, up 6.1 percent from 3.84 million won in 2011.

It was the highest growth since the 5.8 percent year-on-year gain in 2003. 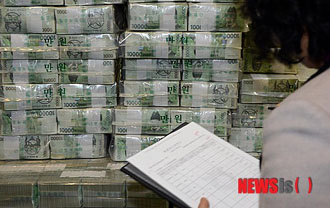 “The overall increase in household income is attributed to a growing number of employed Koreans owing to improving labor market conditions and an increased percentage of full-time workers,” the report said.

“The latest figures proved that one of the most effective ways to distribute income equally is creating jobs,” said Lee Hyung-il, a director at the Economic Policy Bureau of the Finance Ministry.

Household spending also rose, but at a slower pace than income.

The average monthly expenditure went up 3.3 percent to 3.22 million won in 2012 from a year earlier. The inflation-adjusted figure stood at 1 percent.

Non-consumption expenditure, including payments on taxes, pensions and insurance, also expanded 5.1 percent year-on-year to 76,000 won per household, the report showed.

The average disposable income of Korean households hit a new high of 3.32 million won since 2003.

The average surplus of households, subtracting expenditures from the income, reached 860,000 won, marking double-digit growth for the first time since 2003. The ratio of surplus to disposable income also rose 2.6 percentage points, recording the largest expansion since then.