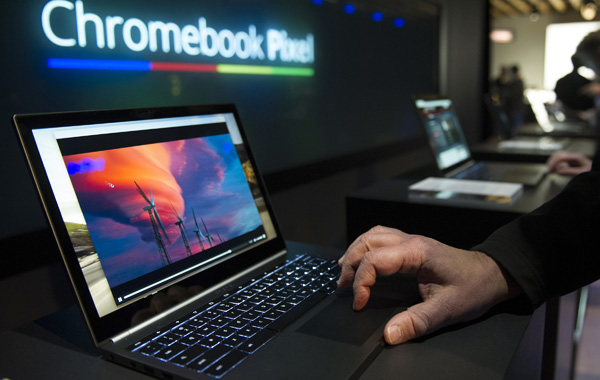 Google, owner of the world’s most popular search engine, debuted a touchscreeen version of its Chromebook laptop at a launch event Thursday in San Francisco Thursday. [BLOOMBERG]

Google, owner of the world’s most popular search engine, yesterday debuted a touchscreen version of the Chromebook laptop, stepping up its challenge to Microsoft and Apple in computer hardware.

A Wi-Fi-only version of the Chromebook Pixel will go on sale in the U.S. for $1,299, Google said at an event in San Francisco. In April, the company plans to introduce a $1,449 version with access to so-called long-term evolution wireless networks, the fastest available.

Google, already leading in the market for smartphones with its Android software, is expanding in hardware to lure more users to its Web-based services with Chromebooks, which rely on Internet applications instead of built-in software. The company is taking a risk by pushing into the high end of a personal computer market that’s been slammed by diminishing demand. Laptop purchases have tapered off as consumers increasingly favor smartphones and tablets.

“There’s a limited number of things you can do well with these types of machines,” said Al Hilwa, an analyst at IDC. “The price is fairly high.”

In June, Google unveiled a $199 touchscreen tablet, Nexus 7, to compete with Apple’s iPad as well as the Surface, a tablet introduced that month by Microsoft. An older Chromebook made by Acer costs $199, while some versions from Samsung Electronics and Hewlett-Packard cost more than $300.

Google, based in Mountain View, California, has stumbled with some previous forays into hardware. The company’s Chrome laptops have been slow to gain traction with consumers, as have the Google TV set-top boxes and high-definition televisions.

The Pixel machine will be built by a manufacturer in Taiwan, Google said, without naming the company. It has 4.3 million pixels, more than twice as many as a typical high-definition television, and features a 12.85-inch screen, Google said. The device has a glass touchpad, and it runs Google’s Chrome operating system.

“Touch is here to stay and is the future,” Sundar Pichai, senior vice president for Chrome, said at the event. Bloomberg