For chocolate connoisseur, every day is sweet

For chocolate connoisseur, every day is sweet 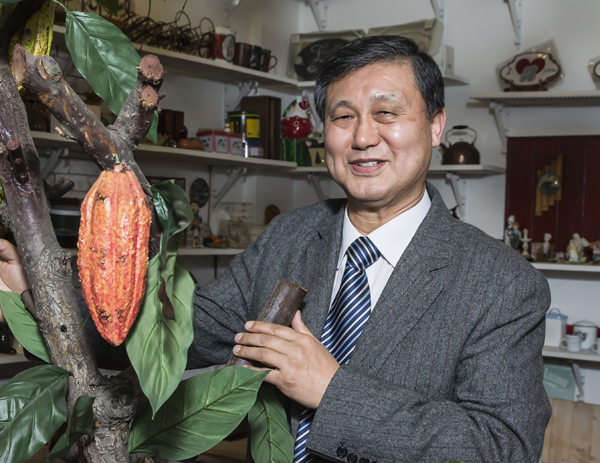 Ju Jin-yun and his imitation cacao tree. “They grow only within 20 degrees latitude of the Equator,” he says. By Shin Dong-yeun

“Korea offers many pretty chocolates. But what about the insides, the ingredients? I want to improve the quality of Korean chocolates,” says Ju Jini-yun, CEO of the Chocolate Museum in Seogwipo, Jeju.

Ju recently received a doctoral degree in engineering from Dankook University, and his dissertation was on the best temperature, time and amount of sugar for conching (stirring to soften chocolate) “Ariba” cacao seeds from South America.

However, it’s only quite recently that Ju got involved in the chocolate business.

Chocolate was nothing more than a hobby to the 67-year-old, who studied shipping and aviation at Seoul National University. After working for Daewoo International, he set up a company called Agabang, which specializes in baby products, in 1978 and sold it in 1988.

It was when Agabang began to make a profit that Ju became interested in chocolate while taking overseas business trips with his wife. The couple vowed to spend the rest of their lives making chocolate, and since then they have gathered as much information as they could by visiting chocolate factories and schools around the world.

In 2002, he opened the museum on Jeju, embarking on a new phase of his life.

“The value of chocolate changed over time,” Ju says. “It used to be a means of currency in South America before Columbus’ discovery of America. It was a status symbol in Spain.

“People used to prefer sweet American chocolate or various kinds of Belgian and Swiss chocolate. But today, chocolate that emphasizes the original taste and flavor of cacao is the most sought after.” he said.

And Ju wants to be the leader of that trend. He decided to select cacao seeds himself, grow them and produce chocolate that highlights the taste and flavor of cacao.

“Cacao seeds are not readily available because the cacao tree is a tropical plant that grows only within 20 degrees latitude of the Equator. So I had no choice but to buy couverture chocolate that is made from processed cacao by multinational companies such as Cargill and Nestle. But I was not satisfied with it,” he says.

In 2010, he bought land in Tena, southeast Ecuador and is running a farm there. He is raising 40 wild cacao trees from seeds he got from high in the Andes mountains.

“They are original seeds that have good flavors. I am using them to produce rich-tasting chocolate even though they are extremely vulnerable to external environmental factors and don’t yield a lot,” he says.

Yet Ju’s plans don’t stop here. “I’m going to put a chocolate museum near Niagara Falls. In 2010, I bought an old church there, and it is currently under renovation. I hope to open a museum there in two years. I have poured all the money I’ve ever saved since I was young into these projects, so my friends call me crazy. But money is not my life goal. I will never stop challenging my creativity.”