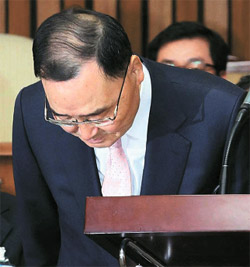 The legislature’s decision to delay the adoption of Jung’s confirmation hearing report was part of the deadlock over Park’s attempt to change the government structure.

Jung, a 68-year-old former prosecutor who headed the ruling Saenuri Party’s nomination committee for general election candidates last year, was nominated by Park on Feb. 8. She originally nominated Kim Yong-joon, head of her transition team, but he gave up the nomination after media and opposition lawmakers made draft-dodging allegations against his sons and accused his family of real estate speculation.

The special committee said it will meet again at 1 p.m. Tuesday. Park’s inauguration is scheduled for Monday.

Because of the deadlock at the National Assembly over a package of bills to restructure the government, Park will begin her five-year term with the cabinet from predecessor Lee Myung-bak.

“We didn’t see any problem in the morning, but the DUP suddenly postponed approving the confirmation report,” said Representative Hong Il-pyo of the Saenuri Party.

Lawmakers of the ruling party suspected the DUP was using the prime minister confirmation process as a bargaining chip to win its demands in the government restructuring bills.

Park wants to create a ministry of future planning and science, reviving the maritime ministry and shift trade affairs from the foreign ministry to the commerce ministry.

The DUP has protested some of the changes, particularly her plan to giving broadcasting industry policy making to the new future planning ministry. The DUP said those powers must stay with the Korea Communications Commission. “The key disagreement is the Korea Communications Commission,” said Representative Woo Won-sik, deputy floor leader of the DUP.