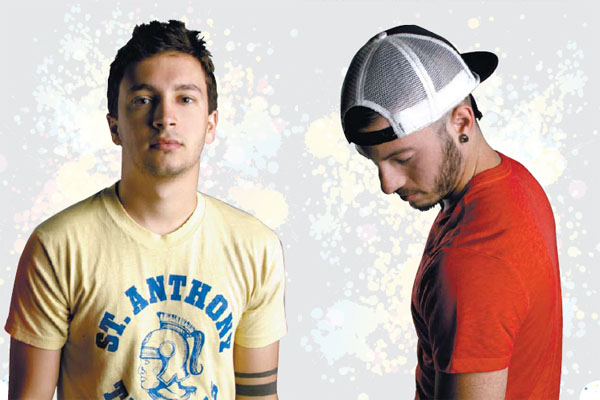 Avid local fan base draws the U.S. two-piece back for its first solo show here Twenty One Pilots is Tyler Joseph, left, on lead vocals, piano, ukulele and synthesizer, and Josh Dun, right, on drums.Provided by Warner Music Korea

If Twenty One Pilots are pushed to pinpoint a genre for their music, they’d call it “schizoid-pop.” Columbus, Ohio natives Tyler Joseph and Josh Dun say the term was newly coined for their band by a writer in their hometown and they think it’s about as close as anyone is going to get.

They tend to take their own approach to music. The two-piece say their sound is “confusing” but not to an extent that it’s “a turn-off to people.” They say they’re just making the stuff they “wish other people were writing.”

“A question we’ve always had a hard time explaining is, ‘What genre is your music?’ We never really knew how to answer this,” said Joseph, the lead singer who also plays the piano, ukulele and synthesizer in the band. “There’s a line between too weird, and too safe. We like to try and balance on that line and mess with that line as much as possible.”

The band began to gain popularity among Korean fans with a performance at Jisan Rock Valley Festival last year. On March 1, the band will be coming to Seoul for its first solo concert here. The Korea JoongAng Daily interviewed the band via e-mail.

Q. Korean fans know of Twenty One Pilots from your performance at Jisan Rock Valley Festival last summer. This upcoming concert will be your first solo show in Korea. How does it feel?

Dun: It’s an incredible feeling. For the last two concerts in Korea, we felt like we had so much to show to the fans, but we couldn’t. We see the last shows as a breakout for us in the Korea market. The upcoming tour is just about us two and the fans.

Why did you choose to go with a piano rather than a guitar, and a duo than a group?

Dun: Tyler tried playing the guitar before getting into keyboard. He didn’t really stick with it for pretty much the same reason that I never stuck with it - it hurts your fingers. Why would you want to do that? So he started playing something a little less painful, the keyboard.

When we finally started playing music together, we had a really cool friendship and built up excitement to play music together, so we felt like we just wanted to take on the world of bands and music and performing by ourselves - just two of us. We decided to rely on technology to fill in the rest. That may not make a whole lot of sense until you see us perform live. I hope that it would then. For right now it seems to work and it’s a lot of fun having just two people.

The video clip you shot to promote your upcoming Seoul concert is grabbing the attention of Korean fans on YouTube because you spoke a bit of Korean and did the “V” gesture Koreans always use in photos. It seems you guys know which buttons to push here. How do you feel about Korea and the Korean music scene?

Dun: I was actually able to travel to Korea three times with my previous bands before Twenty One Pilots, so I’ve become quite familiar with Korean culture. When it comes to Korean music, K-pop has a really cool sound. I’d like to get into it more. The song “Gangnam Style” really exploded. I was proud of Korea and excited to come over there and play.

Joseph: We love it there. The culture is very different from America in a lot of cool ways. Very accepting of new people and really excited about new music. That’s not always the case in America. It’s fun to walk around and meet new people and try new foods. Shopping in Korea is always very fun and interesting.

Twenty One Pilots already have a fan club established here in Korea. Why do you think the band is attracting so many Korean fans?

Joseph: It’s so cool to hear that. To have fans anywhere is a great feeling. Art for anybody is a vulnerable thing. It’s exposing yourself in a big way. Nobody can ever be 100 percent sure that people will like what they do or if it will catch on, but we’ve always believed our music would and it’s truly awesome to see so many people responding positively to our music. The response here in the U.S. has been great, but for some reason, when the response is great in a country on the other side of the world, it seems like it just legitimizes it a little bit more.

What’s the story behind the name Twenty One Pilots?

Joseph: I was studying a play in college called “All My Sons” by Arthur Miller. The story was that the main character was building airplane parts for the current war. He learned that some of those parts were faulty, and he had a decision to make: “Do I send them out because I need to make the money to feed my family or do I recall the parts because they could be dangerous?”

Well, he ended up sending the parts out, which is the wrong decision, and twenty-one pilots died because of it. He spends the rest of the play trying to justify why he did that, and at the end of the play, he ends up offing himself.

Anytime we have a decision coming our way, there’s the easy route, the route that gets you the money or the fame or all the benefits right away. But in the end, it’s the wrong decision. A lot of times, the right decision takes more work, and that band name is a constant reminder for us as individuals and as a band. So, that’s where Twenty One Pilots comes from.

What’s the concert in March going to be like? What can the fans expect?

Dun: Like we’ve said before, this is going to be about just us two and the fans. We’re going to play some great music and it’s going to be a lot of fun. You should be very excited.

Twenty One Pilots will stage its first solo concert in Korea at the Walker Hill Theater at the Sheraton Grande Walker Hill Hotel in eastern Seoul on March 1. The show starts at 10 p.m. Tickets cost 66,000 won ($ 60.83) ahead of time or 77,000 won at the door. Only those aged 19 years and over are allowed. Special guests Dguru X Acidpunk Dynamite, 9VM5 and Squatters will also perform. For more information, call (010) 3360-7846 or visit twentyonepilots.com.