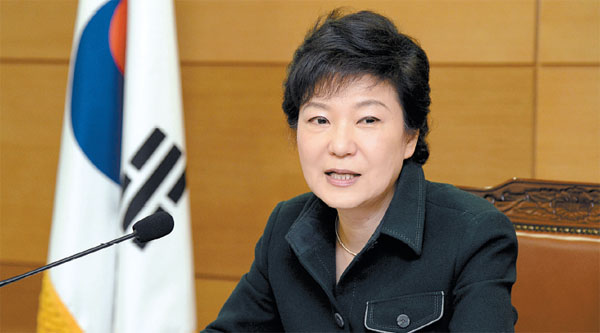 Jack Ma, one of China’s best known billionaires and entrepreneurs, said last month that he will be stepping down as the chief executive of Alibaba Group that runs China’s most popular portal and e-commerce sites. The group founder said he was resigning from one of the world’s biggest online corporate empires to make way for brilliant young people with bigger and more brilliant dreams than his - and because younger people are better apt in responding to the fast-changing Internet world. But Ma is hardly an old hat. He is just 48.

The presidential transition committee announced the incoming Park Geun-hye administration’s agenda, placing creation of an inventive economy as a top priority. It is nothing new. Park repeatedly emphasized the so-called inventive economy and had it on the first page of her campaign platform. She aims to generate new growth and jobs through innovating.

She also stressed moving the economy to the forefront from its status among the chasing group. Who would argue with the magic words “inventive economy,” which are supposed to make all the structural problems - low and jobless economic growth, a lacking welfare system and polarization - disappear?

But the slogan must be matched with productive action. I am not so sure if the Park Geun-hye administration is that creative. To realign an economy towards vibrant innovation and creativity, it must have the necessary nuts and bolts. But her track record so far does not suggest she or her government bear them. I do not want to be sarcastic, but it comes from my deepest hope that the new government could accomplish the goal, which is essential for our economy.

Innovation has mostly been an industrial term and so is inventive entrepreneurship. Samsung Group Chairman Lee Kun-hee was first to raise the banner cry about 10 years ago. He preached about it in an executive meeting in September 2006. He advised executives of Samsung companies to be inventive in management by thinking about everything from scratch to come up with new ideas.

He expanded on application of innovation and creative thinking. The companies should not simply come up with new products, but industrial output of new concepts, he said.

Steve Jobs, creator of the iPhone, was a champion of new thinking. Entrepreneurs hungrily search for talent. Lee of Samsung ordered the human relations department to hunt for brilliant minds and talent regardless of the cost because they are the hope for generating new and lucrative businesses for the group.

We come back to the new president. President-elect Park does not detail inventive economic measures in speeches. She instead wants to show her intent though action. She created a new Future Planning and Science Ministry and named Korean-American entrepreneur Kim Jeong-hun as its first head despite controversy about his double nationality. Her surprising choice of talent has, however, been undermined by the opaque and closed nature of recruitment.

Communication is the basic element of an inventive economy. Creativity is a by-product of intense brainstorming and discussions. New perspectives can emerge from convergence of diverse ideas and cultures. It can be bred using open minds and organization. Openness is most important. The president must be open and ready to listen and engage opposing views. She must surround herself with honest people who need not hesitate in expressing their opinions. But few in her government, including the presidential office, are free to disagree. There are also few young and brilliant talents among their ranks.

Park’s choices suggest that she may not have looked hard enough. As the retiring founder and CEO of Alibaba said, innovation is only possible through young, brilliant minds. The younger generation is more capable of adapting and responding to the rapidly changing environment, but not many of her nominees fit the description. Her first appointment was a 76-year-old nominee for prime minister.

If Park wishes to pursue an inventive economy, she must first be inventive herself. Among her advisers should be people with different opinions, views and ideas. A diversity of opinions should be encouraged. The president-elect, too, should come down from her high horse and actively join the debate.

Korean companies and entrepreneurs have been emphasizing inventive management for more than a decade, but there has been little progress. It’s time for the government to wake up and help.