‘Car of the Year’ Camry a sign of changing times

‘Car of the Year’ Camry a sign of changing times 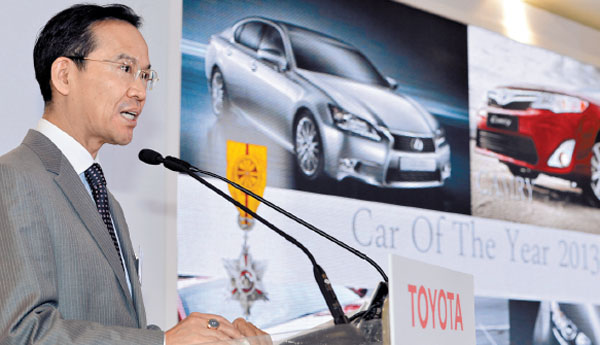 President of the Korean unit of Toyota Motor talks at a press conference at a Toyota showroom in central Seoul on Feb. 6. Toyota’s Camry has been selected the “Car of the Year” at the home turf of Hyundai Motor in February. [NEWSIS]

For more than two decades, Hyundai Motor could count on the sun rising each morning and Koreans buying Korean vehicles. Then Toyota Motor’s Camry became the country’s “Car of the Year.”

Sure, it’s the same staid sedan that won consumers’ hearts around the globe, with more than 14 million units rolling off Toyota production lines since 1982. But given Korea’s fraught relationship with its former occupier, it was a surprise the country’s auto journalists awarded the title to any Japanese car.

Shifting attitudes toward foreign goods in Korea, free-trade pacts and a stronger currency have driven the share of imports to a record in Asia’s fourth-biggest car market. For Toyota, annual shipments on a par with those it makes to Hawaii are no big deal; for Hyundai and its Kia Motors affiliate, they represent a breach of their biggest profit center, just as global sales are eroded by a strong won.

“Before, Korean people chose what they wore, what they used, what cars they drove based on whether they were made by Koreans,” said Takeshi Miyao, an industry analyst at researcher Carnorama Japan in Tokyo. “If you look at the streets of Seoul now, younger people are buying imported brands and choosing based on whether they’re good quality.”

Take Kim Sung-eun. “I didn’t even consider Hyundais when looking for a new car this winter,” said the 27-year-old online marketer in Seoul. “I don’t think my car has anything to do with patriotism. It’s just a personal choice.”

In Kim’s case, that’s between Toyota’s Prius and the Camry, which this month beat out 44 other cars, including models from previous winners Hyundai and Kia, to become the first foreign vehicle to win the Korea Automobile Journalist Association’s award.

Such inroads by foreign companies would have been almost unthinkable as recently as a decade ago, when Korean carmakers controlled more than 99 percent of the domestic market.

Protected by tariffs as part Park Chung Hee’s plans to modernize his agrarian country, Hyundai began mass producing its Pony sedan in 1975 and now churns out more than 4 million cars a year, with 2012 revenue of 84.5 trillion won ($78 billion).

After Korea was forced to accept a humiliating $60 billion bailout from lenders including the International Monetary Fund in 1998 during the Asian financial crisis, newspaper columns sang the virtues of buying and using only domestic products: clothes made by Korean brands over Nike, Korean movies instead of Hollywood blockbusters and Hyundai rather than imports.

That’s begun to change. Within a year of its introduction in 2009, Apple’s iPhone captured a quarter of Korean smartphone sales. Imported beer consumption grew at twice the pace of the overall market between 2007 and 2011, according to data from the Korea Alcohol & Liquor Industry Association and the Korea Wines & Spirits Importers Association.

Korean sales of Toyotas - including the high-end Lexus models - gained 73 percent last year to 15,771 vehicles, making it the fourth-biggest foreign brand in the country, with 1.2 percent of the market, the import data show. Bayerische Motoren Werke was first, with 28,152 units.

“Korea is where Hyundai and Kia sell most of their top-end models, and these offer higher margins,” said Lee Hyung-sil, an analyst at Shinyoung Securities.

Both companies reported quarterly profit declines last month and expressed concern about worsening exchange rates that make imports cheaper while reducing the value of cars they export. The won gained 4.8 percent against the dollar over the past six months; the yen dropped 15 percent.

Hyundai garnered more than 60 percent of its operating profit last year from Korean revenue that made up 45 percent of the total, data compiled by Bloomberg show. The United States accounted for only 22 percent of profit, though 30 percent of sales.

To win back Korean customers, Hyundai cut the price of mid-size sedans as by as much as 1 million won, or about 3.5 percent of the sticker price for its top-end Sonata hybrid. Kia, in which Hyundai holds a 34 percent stake, cut the price of its flagship K9 luxury sedan.

Toyota, meantime, will introduce the RAV4 sport utility vehicle and U.S.-made Avalon sedan to Korea this year, while its Lexus luxury unit will bring in the IS model from Japan.

Honda Motor, Japan’s third-biggest carmaker, introduced five new models between November and January, including the Accord sedan, its best-selling car in the United States.

For Hyundai, the success of foreign producers in Korea hurts the automaker as Japanese carmakers win back a share in export markets they lost in the wake of the 2011 earthquake and tsunami in Japan and flooding in Thailand that disrupted output.

Korea is Hyundai’s third-biggest market, behind China and the United States, as well as its main production base. The company says it made 43 percent of its vehicles at home last year.

While lingering resentment over Japan’s invasion and occupation continues to cloud political relations between the two nations - most recently marked by territorial disputes - it seems consumers have moved on.

“Koreans aren’t as sensitive as they were in the past about Japanese products,” said Park Jung-hyun, a senior researcher at LG Economic Research Institute in Seoul. “Consumers want products made in developed countries, which they trust will only offer quality products. Japan and Germany fit into that trustworthy category.”