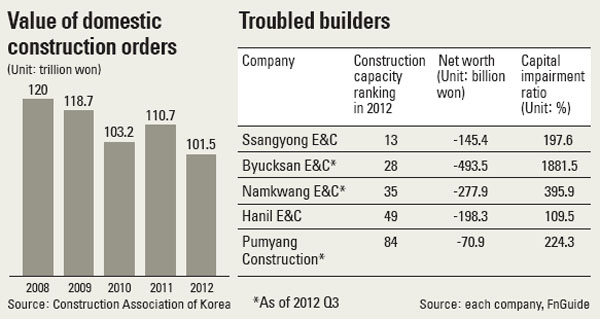 As housing market slump continues, some midsize construction firms are on the verge of being delisted from the stock exchange.

Hanil Engineering & Construction, the nation’s 49th-largest builder in terms of construction capability, Feb. 15 filed for court receivership after it posted a net loss of 298.8 billion won ($274 million) last year, more than 10 times what the company lost in 2011.

The loss impaired the builder’s capital worth 181.1 billion won, meaning the company could not pay its debts even if it sells all of its assets. The builder has been under a debt workout program since 2010.

Trading of Hanil E&C shares was suspended by the Korea Exchange on Feb. 4, citing capital erosion. If the company can’t recover by April 1, it will be delisted.

Ssangyong Engineering & Construction, Korea’s 13th-largest builder, also is at risk of delisting after its capital base was wiped out due to the country’s protracted housing slump.

Korea’s largest builder, excluding conglomerate-run firms, said it posted a net loss of 411.4 billion won last year, more than a double from a year earlier when it lost 157 billion won. As of last year, the company’s total assets were 1.21 trillion won and its total debt 1.35 trillion won.

The Korea Exchange suspended trading of Ssangyong E&C’s shares on Feb. 8 after the company failed to adequately address speculation about capital erosion. Now the company that built Singapore’s landmark Marina Bay Sands Hotel also faces the possibility of being delisted by the Korean Securities Dealers Automated Quotation (Kosdaq) if it can’t resolve its liquidity crisis by April 1.

But Ssangyong E&C remains confident. “The company definitely can be normalized if the debt-for-equity swap can be successfully carried out,” said a Sssangyong E&C official. “We are currently negotiating in many foreign countries to get orders, but the issue is making it difficult.”

Other mid-sized builders are slipping struggling with increasing net losses.

According to the Korea Exchange, six construction firms have been forced to pull out of the stock market since 2008.

Data from Construction Association of Korea (CAK) shows that 20 of the top 100 Korean construction companies are under either a debt workout program or court receivership.

In addition, the number of construction firms in Korea has been going down steadily since 2006. As of last year, 11,304 construction companies were operating, down 241 from year earlier, the CAK data showed.

Local builders reported a combined 101.5 trillion won worth of new orders last year, 8.3 percent less than the previous year, according to data from the CAK. The figure is the lowest since 2006.

The CAK said orders from the public sector dropped 7 percent year-on-year to 34.7 trillion won while those from the private sector were down 9 percent to 67.4 trillion won.

“Absence of large state projects and a housing market slump led to the poor performance of builders,” an official from the CAK said. “But what’s more worrying is that domestic orders are unlikely to increase for the time being due to cuts in the social infrastructure budget and signs of economic weakness in Korea.”

“There should be a revision in the law to have better cash injection to companies in financial trouble,” the federation said in a release. “Company management and bank creditors should have more responsibility in the reviving process.”