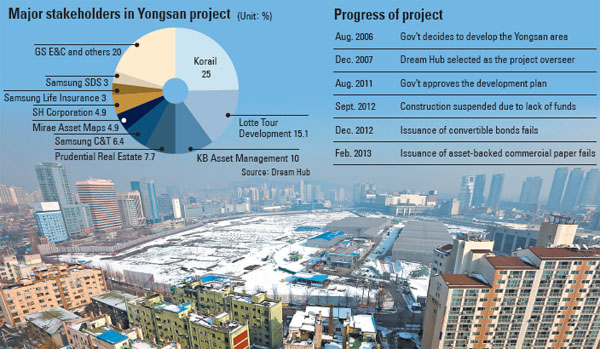 The Lee Myung-bak government’s plan to develop Yongsan District in central Seoul is risking going bankrupt due to lack of funding.

Back in 2007, the government painted a rosy picture. It talked about turning the area that was mainly made up of Korail’s train warehouses into a large international complex, consisting of offices, shopping malls, hotels and apartments.

It wanted to make the district a landmark of East Asia, full of skyscrapers, including a handful of 100-story buildings.

After the announcement, the property price of the area surged.

However, in the wake of the 2008 global financial crisis, the ambitious plan went off the rails.

First of all, the government had trouble financing the 31 trillion won needed to begin the project. It couldn’t even finance 8 trillion won to purchase the land from Korail.

The 29 corporations that made investments in the project had conflicts with the land owner, Korail, about how to finance the project for the past five years.

When the project needed emergency funds, the investors had to take out loans from banks, using the land as collateral. Without any solution to raise the funds, the project saw debt piling up even before it began.

One of the causes stemmed from the falling profitability of the Yongsan project in the aftermath of the financial crisis.

International businesses that once intended to buy buildings in the region decided not to do so for financial reasons.

“Prices of buildings and houses in the region were estimated to make lower profits than expected,” said Kim Sun-deok, head of the Construction Industry Strategy Research.

Another cause was that the country’s real estate market was pushed into a deep recession, causing the price of the Yongsan areas to decline.

As the outlook for profitability became dire, the investors had to cope with growing risks, sparking fierce conflicts among them.

Samsung C&T, a major stakeholder, decided to drop out of the project in August 2010. The company had been leading the project as the largest shareholder of Yongsan Development Corporation, an asset management unit of the Dream Hub Project Finance Investment, the overseer of the whole project.

However, none of the other construction companies volunteered to receive advance payment guarantees.

After Samsung left the project, the investors couldn’t find another company to take Samsung’s place in the agreement.

Korail and the remaining investors had different views on how to proceed with the development plan.

While Korail insisted on a phase-by-phase development plan, the private investors argued the plan would cause high inefficiency and delay completion of the project.

They also said autonomy of each investor would be undermined if Korail exercises too much power on the project.

While the two parties are engaged in a tug-of-war, there is not enough time left for the Yongsan Development Corporation to cover its 5.9 billion won in loan interest, which is due by March 12. It only has 900 million won in its coffers.

There is no other way to pay the interest, since Korail refused to provide collateral to help issue 300 billion won worth of asset-backed commercial paper yesterday.

In December, the private investors opposed issuing 250 billion won worth of convertible bonds.

If the Yongsan Development Corporation goes bankrupt, this project would also collapse, causing severe consequences in terms of socio-economics. The investors have so far invested one trillion won as basic capital for the project. The investment will disappear if the project is scrapped.

“Some of the companies would have problems in management as they won’t be able to withdraw the initial investment,” said an official at a construction company.

Korail would also lose the opportunity to make up its deficits. The company currently is burdened with 4.5 trillion won in debt incurred by the government’s plan to build railways for KTX.

Residents in Yongsan District would also be victims. Since 2007, about 2,200 households there weren’t able to use any financial options to receive loans since their properties became part of the project.

“If the project turns out to be a failure, the residents will be the biggest victims,” said Kim Chan, a group leader in the district.

“It is certain that the land and housing prices will plunge after the project fails, aggravating the current slump in the real estate market,” said Lee Nam-soo, a manager at Shinhan Bank’s real estate team.

The Korean government would also have to bear international humiliation if it cancels the project, since it tried to attract foreign engineering businesses to design new buildings for the complex.

“There were too many stakeholders involved in this project, while profitability kept falling due to the economic situation,” said Doo Seong-kyu, a director at the Construction Economy Research Institute.