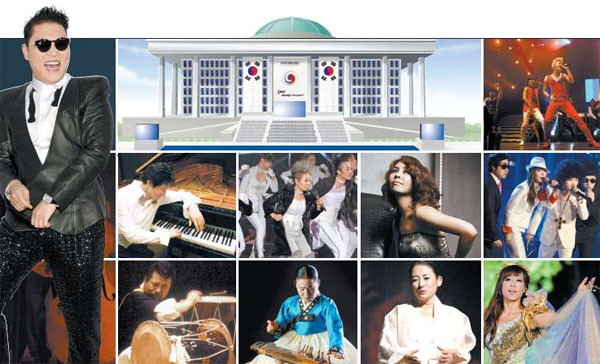 Today is not just a big day for President-elect Park Geun-hye, but some performing artists. Musicians and performers from different genres, including Psy, left, will be performing at the inauguration ceremony. Here is part of the lineup: (From top to bottom, left to right) JYJ, Yang Bang-ean, Insooni, Choi Jung-won, Brave Fellows, Kim Duk-soo, Ahn Suk-seon, Kim Young-im and Sumi Jo. [JoongAng Ilbo]

The performances at Park Geun-hye’s inauguration ceremony today are basically a historical survey of Korea’s pop and culture scene from the 1950s to the present.

Musicians and performers will be singing popular songs from the past six decades. Traditional musicians will also take the stage.

“The celebratory performances will seek to embrace all generations of Korea and integrate the different times,” the committee managing the event said in a press release. “Performers will sing representative songs from different periods, and we will also showcase video that reflects different times, ranging from the foundation of the country to the present day.”

Notable names in the lineup include Kim Duk-soo, a renowned traditional musician. Best known for samulnori (percussion performed on four instruments called the kkwaenggwari, the jing, the janggu and the buk), Kim will kick off the day with a solo set on the taepyeongso, a Korean oboe.

Singers like Mr. Brass and Jang Yoon-jung will get the older members of the crowd singing along with hits from the ’50s and ’60s such as “Master Sergeant Kim from Vietnam” and “Man in a Yellow Shirt.”

Musical stars Nam Kyung-joo and Sonya bring in the spirit of the ’70s and ’80s with “Whale Hunting” and “Let’s Go on a Trip.”

Rounding out the century, boy band JYJ will sing “I Know” by Seo Taiji & Boys, a legendary band from the ’90s. JYJ will also sing the popular chant song from the 2002 FIFA World Cup co-hosted by Korea and Japan, “Oh Pilseung Korea (Victorious Korea).” The national team made great strides in the Cup and 2002 has a special place in the national memory.

The present state of pop music will be represented by, who else, Psy, who will break out his hits “Champion” and “Gangnam Style” to wrap up the performances before the actual ceremony. There is a very high probability of a lot of horse dancing going on among what’s forecast to be a crowd of 70,000.

The ceremony itself will also be a who’s who of Korea’s performance scene.

Award-winning soprano Sumi Jo and baritone Choi Hyun-soo (also known as Hans Choi) will sing the national anthem together, while “Arirang Fantasy,” a reinterpretation of the national folk song by Korean-Japanese pianist, composer and producer Yang Bang-ean will be performed by four of the nation’s biggest divas.

Their genres run the gamut: Ahn Suk-seon is a master of traditional narrative singing called pansori and intangible cultural property No. 23; Insooni is one of Korea’s most beloved singers; Choi Jung-won is a musical star; and Nah Youn-sun is a widely respected jazz vocalist. How the four combine their respective genres has been the subject of much speculation.

Meanwhile, a band that rose to stardom from an audition program - Ulala Session - chose not to perform at the ceremony as its remaining members are mourning the recent loss of vocalist Lim Yoon-taek.

Music and dance is certainly a good way to appeal to the public.

Last year, the Ministry of Culture, Sports and Tourism and Korean Studies Advancement Center conducted a survey regarding the cultural DNA of Koreans. The ministry finalized the ten attributes of Koreans, and said one of the most notable attributes was heung - which roughly translates as an inclination to dance and sing or perform and entertain in some way, basically, an energetic and joyful mood. There will certainly be a lot of heung in the air today.