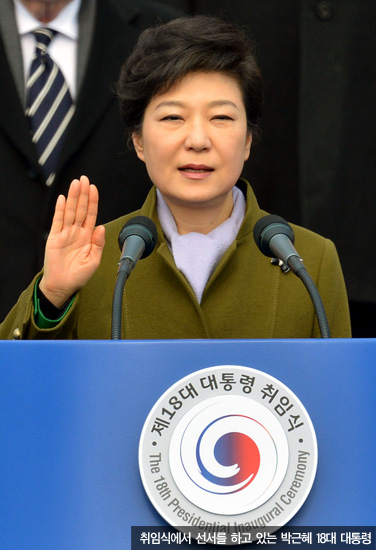 The 61-year-old daughter of strongman Park Chung Hee has promised to usher in a “new era of happiness and hope for the people.” Her presidency will be ushered in by a day of celebratory events.

The celebrations began at midnight with the ringing of the Bosingak Bell in Jongno, central Seoul. Eighteen representatives were selected from around the country, including a North Korean defector, to ring the bell 33 times.

After visiting the National Cemetery in the early morning, Park will attend her inauguration ceremony at the National Assembly compound. In addition to senior officials and dignitaries from abroad, 70,000 people were invited to join the event to see Korea’s first woman president taking the oath of office around 11 a.m. and listen to her inaugural address.

Later in the day, Park returns to the Blue House, the nickname for Korea’s presidential compound, where she spent her teenage years and also served as acting first lady after her mother’s assassination in 1974. Park is the first child of a former leader to ascend to the presidency.

The three key concepts in her inauguration speech today will be “happiness of the people,” “change to a new era” and “grand national unity,” close associates told the JoongAng Ilbo yesterday.

Without any inauguration speech team, it will be written mainly with Jeong Ho-seong, a longtime aide to Park. Jeong has been her aide for 14 years since 1998.

The 15- or 20-minute speech will mention key policy goals set by her transition team including job creation, crime prevention and public safety, social welfare, the so-called trustpolitiks she wants to establish with North Korea and nuclear deterrence.

Tensions are high among the presidential guards due to North Korea’s nuclear test on Feb. 12, less than two weeks before the inauguration.

The South Korean military has launched a security system for Park’s house in Samseong-dong, southern Seoul. Fighter jets such as KF-16s or F-15Ks will patrol and an antiterrorism unit will be ready for any emergency. The capital defense command of the South Korean Army will guard Seoul. The Navy will send some warships to the Yellow Sea to prevent possible military clashes.

Lee, a noted feminist, said in a meeting with Park on Aug. 22, 2012 that if she became the next Korean president, “All women [in Korea] will be so proud of her.” 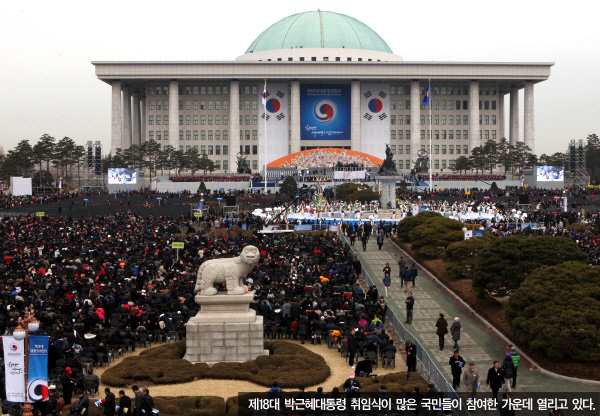 However, Kwon Yang-sook, the first lady of the late President Roh Moo-hyun, will not show up, sources told the JoongAng Ilbo, although she was invited. Kwon reportedly said she was in bad health.

Sources told the JoongAng Ilbo she would have felt uncomfortable because Park’s presidential rival, Moon Jae-in, was a close confidante of her husband.

While Park’s political career has been built on a reputation for keeping her promises at any cost, it remains to be seen if she will be able to follow through on her major campaign pledges. During the presidential campaign, Park’s main promises were more welfare and “economic democratization,” national security and a “grand national unity” to bring to an end the deeply rooted regional, ideological and generational schisms of modern Korea.

One of the first tasks for her administration will be coping with the aftermath of North Korea’s third nuclear test. The test threw an immediate wet blanket on her campaign pledge to improve relations with the North.

Growing concerns about an economic slowdown is another challenge.

Park’s transition team released Thursday a road map for her government, and its top priority was building an innovative economy that creates more jobs. Park already announced an ambitious plan to establish a new ministry for planning for the future and science and made a bold move by nominating Kim Jeong-hun, a successful Korean-American entrepreneur who served as President of Bell Labs and chief strategy officer of Alcatel-Lucent, as its minister.

It appears that the Park government’s immediate goal will be shoring up a slowing economy rather than following through on pledges of economic democratization, which translates into restrictions on conglomerates and aid to small- and medium-sized companies. Ending abusive business practices of conglomerates and protecting small firms were a main slogan in the Park campaign, but the road map downplayed that theme, and her appointments favored officials who favor growth-oriented policies.

The new government will also have to come up with financial resources to fund wider welfare programs promised by Park.

In terms of national unity, Park promised to make appointments of people from various political and regional backgrounds. But that didn’t come through in her choices for the cabinet and presidential secretariat, which were criticized as an attempt to build a patronage system.

Because the main opposition Democratic United Party refuses to support Park’s plan to restructure the government, blaming her for not communicating with the legislature, Park will begin her presidency with the cabinet of her predecessor Lee Myung-bak.