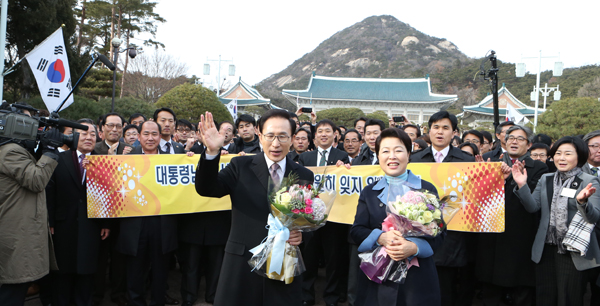 Outgoing President Lee Myung-bak, whose term officially came to an end at midnight yesterday, leaves the Blue House with the first lady yesterday afternoon past a crowd of hundreds of officials and Blue House aides. [Joint Press Corps]

Outgoing President Lee Myung-bak’s term officially came to an end at midnight yesterday as he wrapped up his last acts and prepared to pass the baton to his successor and partymate Park Geun-hye.

Lee said goodbye to the Blue House at 4 p.m. yesterday and moved to his private retirement home in Nonhyeon-dong, Gangnam District.

A smiling Lee and the first lady, Kim Yoon-ok, walked out of the Blue House and shook hands and chatted with hundreds of officials lined up to the gates as they made their way to the car that brought them to their retirement residence a 20-minute drive away.

Lee was greeted by a loud crowd of supporters at the retirement residence who had been screened by security.

Traditionally, the president leaves the Blue House on the afternoon of the day his term ends with the exception of former President Roh Moo-hyun, whose retirement home was not in Seoul. He left the day of Lee’s inauguration.

When Lee, a former Seoul mayor, came into office Feb. 25, 2008, people had high expectations that his background as a CEO and pragmatic style would help revive Korea’s lackluster economy.

His legacy will include a rapid recovery from the global economic crisis that began at the start of his term, heightened international cooperation and trade, including the ratification of free trade agreements with Europe and the U.S., and a very bumpy start when confronted with massive protests about the resumption of U.S. beef imports in his first year as president.

He’ll also be remembered for controversial policies such as the four-rivers restoration project, and bribery scandals involving family and close aides.

Under Lee, Korea successfully hosted the Group of 20 Summit and the Nuclear Security Summit, and it also became a nonpermanent member of the UN Security Council and was chosen to be home of the secretariat of the Global Climate Fund, the so-called World Bank of environmentalism.

On his last day in office, Lee honored the chairman of the GGGI and former Danish Prime Minister Lars Rasmussen and awarded him the Order of Diplomatic Service Merit.

Lee’s last day also included a meeting with Liu Yandong, state counselor and a member of the Central Committee of the Communist Party of China, who delivered a letter from outgoing Chinese President Hu Jintao. As the highest-ranking female official in China, Liu will attend Park’s inauguration ceremony today.

In the letter, Hu said he holds in high esteem Lee’s “contributions to the advancement of strategic bilateral relations,” which have taken “a great step forward” in areas including politics, economics and culture. Hu added that he will “hold in high regard [their] personal friendship.” Lee reciprocated with his own letter that read, “Despite some hardships, our bilateral relationship were upgraded to a strategic partnership, and on that basis, we cooperated well.”

Lee, 71, also paid a visit to the Seoul National Cemetery in southwestern Seoul yesterday with the first lady and members of the cabinet and held his final bilateral talk with Thailand Prime Minister Yingluck Shinawatra, who will attend Park’s inauguration. Lee was the first Korean leader to officially visit Thailand in 31 years.